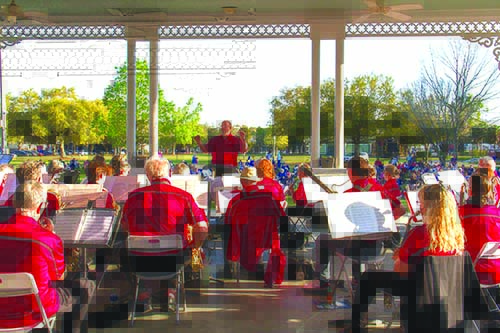 Free Baldwin Pops Band concert May 29 at OWA
The Baldwin Pops Band will present a free outdoor concert on Sunday, May 29 at 5 p.m. at OWA in Foley in the shopping area adjacent to the splash pad. The band will also play on Sunday, May 22 at Honey Bee Park in Robertsdale as part of a year-long Centennial celebration in that city. That concert includes the premiere performance of Hub City March, a concert march, by Ryan J. Williams, commissioned by the Baldwin Pops Band.
Guests should bring chairs or blankets for seating. After intermission, there will be a children’s parade with flags. Attendees in Robertsdale are encouraged to bring a picnic supper. The Checkered Tablecloth Award will be presented to the group with the most interesting picnic setup.
Dr. Jason Rinehart will conduct the Baldwin Pops Band in performances of “As All the Heavens Were A Bell” by Jay Bocook, “Columbia’s Pride” by John Philip Sousa, “Men of Ohio” by Henry Fillmore, “Pacem, A Hymn for Peace” by Robert Spittal, “Selections from The Phantom of the Opera” by Andrew Lloyd Webber, arranged by Warren Barker, “Salute to Ol’ Blue Eyes” arranged by John Moss, “Stone Gardens” by Robert W. Smith, and more.
Each concert is supported by the city/venue in which it is held. In addition, the Baldwin Pops Band is sponsored by a grant from the Alabama State Council on the Arts. Each spring, a scholarship concert is performed including local high school seniors. Donations for the John Allen Memorial Scholarship are gratefully accepted at any concert or by mail to Baldwin Pops Band, P.O.Box 38, Fairhope, AL 36533. Info: baldwinpops.com or 251-987-5757.