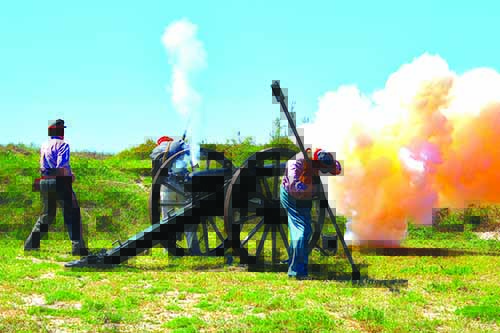 Qualified historians will provide historical insights on various periods of Fort Morgan’s History as part of a tour scheduled every Tuesday afternoon from 2-3 p.m. at the fort, located at the west end of Ft. Morgan Rd. in Gulf Shores. Tour dates are Jan. 2, 9, 16, 23, and 30, and Feb. 6, 13, 20 and 27. The tour is weather permitting.
Tour topics include Fort Bowyer, Early Civil War, Battle of Mobile Bay, Siege of Fort Morgan and Overview of the Civil War at Mobile Point. Reservations are not required for these tours, and weather conditions may cause the event to be cancelled.
Preceded by another fort, Fort Bowyer during the War of 1812, Fort Morgan is a Third System masonry fort built between 1819 and 1833. Standing guard where the bay meets the Gulf of Mexico, the fort played a significant role in the Battle of Mobile Bay in August 1864. Used intermittently through the Spanish American War, World War I and World War II, the site showcases the evolution of seacoast fortifications and adaptations made by the U.S. Army for the defense of the country.
More than just history, the site also has nature areas, and a boat launch for the outdoorsman to enjoy.
The fort is most famous for its role in the Civil War Battle of Mobile Bay. Union Admiral David Farragut damned the torpedoes and went full speed ahead to win the battle. The massive fort contains more than 40 million bricks and pays tribute to the skilled masons, many of whom were enslaved African Americans.
Admission to the fort is $7 for adults, $5 for seniors and students and $4 for children 6 to 12. For more info, visit fort-morgan.org or call 251-251-540-5257 or 251-540-7127.