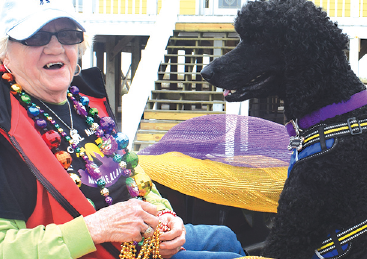 Ft. Morgan Mardi Gras Parade returns Feb. 23
By Fran Thompson If bigger is better, then the 2nd Annual Fort Morgan Mardi Gras Parade will be even more fun than the inaugural event (pictured) that meandered along a beachside strip about 16 miles west of Hwy. 59 last March. The parade is scheduled on Sunday, February 23 starting at 1 p.m. at the intersection of Tripletail Ln. and Ponce DeLeon Ct. It will trace 1.9 miles west along the Gulf of Mexico before turning north at the intersection of South Bernard Ct. and ending at Ft. Morgan Rd. (Hwy. 180). “We limited the amount of people, but we still have a lot of participants,’’ said Gayle Pierce, who organizes the event with help from Lida Kay, Max Weston and others. “We are just waiting for the day,’’ Pierce added. “It’s going real good. It’s up to 150 people, which is 50 more than last year. I really didn’t think we’d reach this many, but we did and it came pretty quickly. Next year, we will add a few more. “We have a variety of people coming and groups from floats and some come up with themes. and it’s building from last year. People out here are already talking about it,’’ she added. “We will have the people who do the re-enactments from the fort (Fort Morgan) walking at the front in their civil war outfits carrying the flag. I think that’s kinda cool that they wanted to dress up in their uniforms and join us,’’ Pierce said. As per specific themes and specific floats from participants, Pierce said she wants to be surprised. “I like to call it a homegrown parade,’’ she said. “We throw it out there and then wait to see what people will do. “People call and want me to come over to discuss what they are doing. But I tell them that’s Ok. I’ll see it when they get there. I want to be surpised. I want to be excited when I see it.’’ Pierce said Kay has been her first assistant since they first asked if there was interest in such an event on a Ft.Morgan neighborhood facebook page less than a month before last year’s parade. Obviously, the answer was yes and the Fort Morgan Parading Society was hashed. “Linda has been a tremendous amount of help,’’ Pierce said. “I don’t do well with facebook and social media, and she has taken over that part.’’ Pierce said the fact that she just has to change dates to obtain the proper permits and insurance made this year easier. The Ft. Morgan Volunteer Fire Dept., of which she is a member, will be integral to helping with traffic and safety concerns. Parade participants will circle back along the route to make sure there is no mess left behind. Also part of the Share The Beach program, Pierce said that she her fellow turtle watchers are planning to pack plenty of beads to throw. Three Ft. Morgan bistros, Tacky Jacks, Sassy Bass Amazin’ Grill and Behind The Pines, are all hosting post parade parties beginning at 2 p.m. featuring food, live music and drink specials. “I want to thank all who have supported this to actually make it happen. We have a great little community and look forward to the celebration,’’ Pierce said. For more parade info, call Pierce at 251-423- 4722. There is also a Fort Morgan Mardi Gras Parade Facebook page.