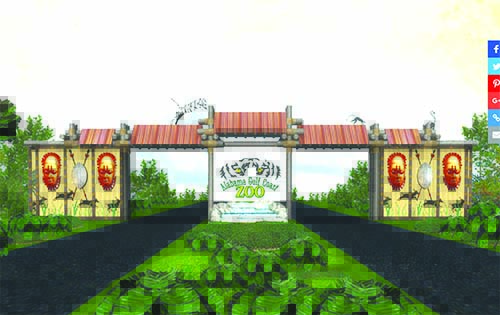 Full build-out of new Alabama Gulf Coast Zoo may commence this month
By Fran Thompson
The story of “The Little Zoo That Could” was perfectly documented in a still popular Animal Planet reality series about the Alabama Gulf Coast Zoo. The series – in 13 episodes – told the story about the Noah’s Ark type evacuation from downtown Gulf Shores to property owned by zoo director Patti Hall in Elberta before Hurricane Ivan took a direct hit on Hwy. 59 back in September of 2004. With no other option, Hall and her staff of 39 moved 275 exotic animals to her family farm in Elberta. It was the first U.S. zoo to conduct a full-scale evacuation during a natural disaster. The hit series led to boom in visitors and vast media attention. (The zoo’s 12 ft. alligator, Chucky, escaped during Ivan’s storm surge, which was an international news story). The zoo has experienced a record-breaking number of visitors (175,000 in 2017) every year since it re-opened following Ivan.
Although the evacuation earned Hall a well deserved CBS Person of the Week award, it also laid bare the fact that the zoo’s residents needed a home on higher ground.
It is now almost certain that the “Little Zoo That Could” will finally become the “The Little Zoo That Grew.”
Although the money was not in the bank as of Feb. 27, a private investment firm is expected to purchase $26.26 million in tax exempt bonds that will fund the zoo’s expansion to it new facility on 25 acres off County Road 6 East. The land, 4.3 miles north of the current location, was donated by the Weir family back in 2006. The bond money will also be used to purchase 71 acres adjacent to the current property.
A Monkey Island exhibit has already been built on the new property, and the Aquascape Pond Squad of TV fame created a showcase water feature near the new zoo’s entrance.
The bond buy is expected to be made public at the zoo’s inaugural A Night on the Wild Side fundraiser on March 3.
The zoo has also secured a $1 million grant from the City of Gulf Shores payable upon completion of construction, which could come as soon as June of 2019. The grant from Gulf Shores will help with the zoo’s operational expenses during the transition. That process could take as long as five months and would not occur during the summer tourist season when the zoo’s parking lot is always full.
“When the zoo first opens, there is going to be lag time for revenues. This will give the zoo operating reserves to fall back on until it is running on its own,” said Steve Jones, chairman of the board of the zoo foundation.
“We hope to start moving dirt in March and our goal is a 12 month construction time,’’ said Jones. “It’s a 60 to 90 day process to get the animals moved and acclimated. We don’t want to shut down the zoo in the summer when it takes in the most money.’’
Jones added that the additional 71 acres can be used for parking and even to build other attractions.
“We’ve discussed different ways to use the property for revenue opportunities once we get the new site ready and before we are ready to move the animal population,’’ Jones said.
“Holy mackerel. It’s been a long time coming, and none of it would have been possible without Patti (Zoo Director Patti Hall),’’ Jones added. “We’ve all been running just to try to keep up with her and her dream. I am so glad that we were able to make this happen.’’