Funds will not prevent O.B. schools from seeking excellence 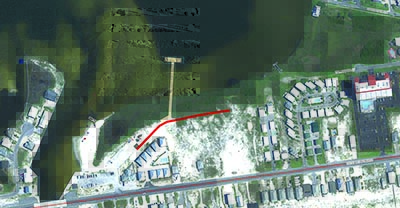 By John Mullen
As parents split into groups of those with high school students and those with middle school students each group ended up with the same first topic of discussion.
The parents gathered at the Orange Beach Community Center on Dec. 12 to ask questions and raise concerns about the new school Baldwin County is building on Canal Road. At the top of the list for both groups was athletics.
“There’s always questions about athletics, how will my child play,” Norma Lynch, the coastal representative on the Baldwin County Board of Education, said. “Until we get the kids and found out what their interests are and what teams they can field that’s something we really can’t answer.”
Several parents expressed concerns about athletics and academics as well as campus security. But they didn’t necessarily show up in droves at the meeting hosted by the city and the Baldwin County Education Coalition.
“We were sure hoping there’d be a lot more parents here tonight,” Mayor Tony Kennon said. “This is very disappointing to be quite honest with you.”
Baldwin County first hoped to open the school in the later part of 2019 but only got one bid from interested contractors. And it was about $20 million over what the county was expecting to pay. In November the board found a more palatable bid from Sharp, Inc., for $26 million with a completion date set for August of 2020.
Things Will Smooth Out In A Year
That development threw a lot of things into flux. It’s anticipated there will be a portable village on city property across the street from Orange Beach Elementary School to house seventh through ninth grades. Rising 10th through 12th graders are expected to finish at Gulf Shores.
All of these contingencies are still at the mercy of the final separation agreement between Gulf Shores and the Baldwin County Board of Education. Those talks began 11 months ago. A meeting was scheduled for Dec. 17 and State Superintendent Eric Mackey has said he wants an agreement before the fall term ends which is Dec. 19.
Kennon says the longer the agreement is delayed the more negative impact it will have on students in his city.
G.S. Dysfunction Affects O.B.
“We, the City of Orange Beach have pretty much stayed out of the negotiations Kennon said. “But now it’s dragging on to the point where it’s starting to affect us, it’s starting to affect our parents and our children. Enough’s enough.
“I don’t get why there’s a spitting match going on between the county and the city. There shouldn’t be. I don’t know who’s at fault and I don’t care. But it’s time for them to get this thing settled and let’s move on. Time is ticking away.”
Lacking an agreement means a lot of the questions parents can’t be answered right now. Both parties have been ordered not to talk about the negotiations by Mackey. But Kennon wanted to go ahead and gather a list of concerns and questions from parents.
“We’re just fielding all their questions, all their thoughts,” Kennon said. “Then what we’re going to do is come back and answer the ones we can but at the same time package everything we can and send it to Eddie Tyler so that he can look over it. He’s coming back in January with his staff and address those. Hopefully, we’ll have a separation agreement by then and he’ll be able to address a lot more.”
Tab For Arts Center: $10 Mil
One thing Kennon made clear was he wants the new school and the existing elementary to compete statewide and the city is willing to spend money to help make that happen. Orange Beach donated the land for the school and is going to spend about $10 million for a performing arts center on the campus.
“The council has been on board 100 percent on anything from a financial position to spend whatever we need to spend to achieve excellence,” Kennon said. “Bottom line is the city, Orange Beach, will have about $23 million in this school by the time it’s over with. We’ll have as much as the county has in it.”
City Wants A Say For Its $23 Mil
In return, Kennon and other city leaders expect to be involved in making county schools in Orange Beach among the best in Alabama.
“I don’t think there’s anybody in the state doing a 50-50 match on a school,” Kennon said. “I expect to be treated differently, I expect them to listen to our community. The school that we’re building is a gem for them to show off.”
Playing on the city’s afterschool Expect Excellence program, Kennon says the wants exactly that in the schools themselves. And Orange Beach willing to help the county make that happen.
Best In State
“I am not comparing Orange Beach schools to the county,” Kennon said. “I’m comparing Orange Beach schools to the best in the state. If we can’t be the best in the state then we have underachieved. Because we have the ability, the financial wherewithal to be the best in the state. No one can hold us back.
“We have to as a community expect excellence, hold our kids to it and hold other parents to it. If we don’t demand excellence, if we don’t demand that we are the best in the state then we’re not going to get it.”