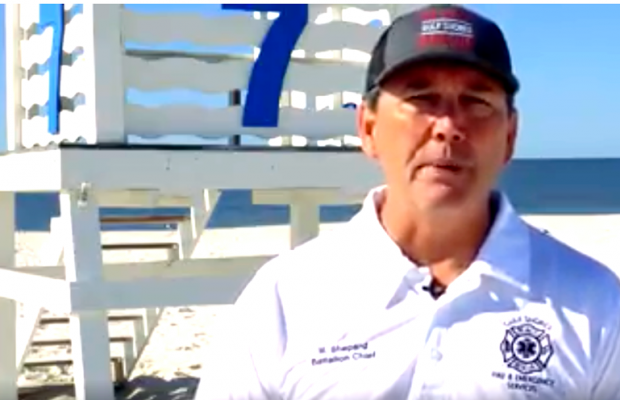 Gulf Shores Fire Battalion Chief Melvin Shepard (pictured) said that for the most part people who are enjoying the city’s beaches for the first time in weeks are following the rules.

“This past weekend as you saw the beaches were rather busy,” Shepard said at the May 11 Gulf Shores City Council meeting. “We did have a couple of large groups not wanting to social distance themselves which was taken care of. There’s been a lot of people on the beach so far as we talked about earlier. It is like summertime, schools are out, a lot of parents are still not working due to the crisis.”

The big crowds have the fire department upping its presence on the beach and expanding into new areas of need.

“We’ve added another lifeguard tower down at Callaway Pass and hoping that will help alleviate some of the issues that we’re having down there,” Shepard said. “As a total right now, we have 11 manned lifeguard towers and four roving patrols. The lifeguards are doing everything they can including teaching an additional surf rescue course this week to hire a couple more lifeguards to help ease the hours they’ve been working.”

Gulf Shores Mayor Robert Craft said he went to the beach several times in the days after the reopening and liked what he saw.

“I spent a fair amount of time down there and was very pleased with the families and their determination to stay six feet apart,” Craft said. “We did have a couple of instances but we were able to manage it with the patrols we have in place and get everyone aware of the requirements for the beach. It worked really well and it was so great to see people back on the beach again. It was a great week, glad to be back.”