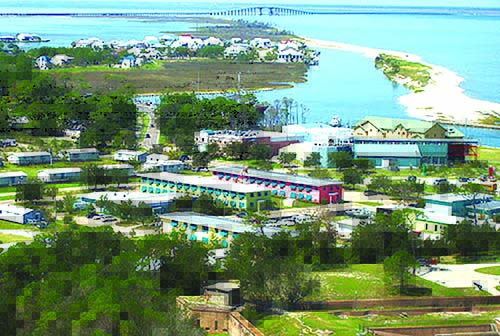 Gov. Ivey names DISL Estuarium the official Aquarium of Alabama
Orange Beach resident Joe Busta suggests name change to better reflect facility’s scope
Alabama Governor Kay Ivey, at the urging of an Orange Beach resident, has signed legislation naming the (DISL) Dauphin Island Sea Lab’s estuarium the Aquarium of Alabama and designating it as the official aquarium of Alabama. The aquarium was created to improve ocean literacy and enhance public understanding and stewardship of our coastal resources, and how the health of the coastal ecosystem affects the entire state’s ecosystem.
The official designtion came at the suggestion of Ono Island’s Dr. Joe Busta, who serves as a consultant to the Dauphin Island Sea Lab and its foundation for strategic planning, fundraising and marketing.
Busta also has a passion for aquaria.
After a trip to Maine and a visit to the Maine Aquarium he realized the Dauphin Island Sea Lab’s Estuarium was not a name well understood by the general public and did not adequately convey the breadth and scope of this fine facility.
He then recommended to the Sea Lab’s leadership they consider renaming and rebranding the Estuarium. The leadership agreed and worked with their Alabama State Representative Chip Brown to created and pass legislation to designate the facility as the official Aquarium of Alabama. A full rollout of the new designation and branding plan will occur later this year. Upgrades to exhibits and new exhibits are also in the planning stages for this year.
The Aquarium ( Estuarium) is open daily and can be visited by Gulf Shores and Orange Beach residents and visitors by way of the ferry that runs multiple times a day round trip from Ft Morgan.
Since 1998, more than one million students and visitors have visited the aquarium. The visual and interactive exhibits take visitors on a journey through the Mobile Tensaw-Delta and Mobile Bay, along the barrier islands, and into the Gulf of Mexico.
The aquarium is open from 9 a.m. to 5 p.m. from March 1 to September 1, and 10 a.m. to 4 p.m. from Sept. 2 to Feb. 28. More info: disl.edu or 251-861-2141.
Pictured: An aerial view of DISL with Fort Gaines in the foreground.