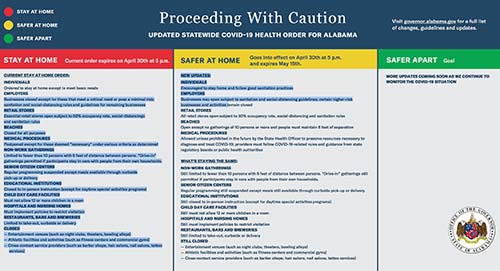 Gov. Ivey says beaches will be open as of 5 p.m. on April 30
Restaurants, breweries & nightclubs closed ’til at least May 15

Alabama Governor Kay Ivey will lift the state’s stay-at-home order when it expires at 5 p.m. on April 30, allowing Alabama’s beaches to re- open subject to social distancing guidelines, including no gathering greater than 10 people. Retail stores will also be allowed to open and non-emergency medical procedures can resume at the state’s medical facilities.

Alabama restaurants will remain closed for on-site dining until at least when the order expires on May 15. The governor said the state hasn’t hit the guideline of 14 days of decreased numbers required to resume on-site dining, and she is working with different state boards and associations to determine when restaurants and close-contact services can reopen. Restaurant take-out and curbside delivery will continue to be allowed.

The Alabama Restaurant and Hospitality Association (ARHA) issue a statement that it is “devastated for our restaurants and their employees who are ready to go back to work.”
The ARHA has developed a plan to safely permit on-premise dining, based on guidance from the National Restaurant Association, the CDC, the FDA, and ServSafe. The plan was provided to Governor Ivey’s office in addition to submitting similar plans to Lt. Governor’s Task Force and the Alabama Department of Public Health.

A study by the National Restaurant Association estimates that Alabama’s restaurant industry will lose $585 million in sales during April. Bob Baumhower, CEO of Aloha Hospitality and Alabama football legend, owns and operates 11 restaurants in nine cities in Alabama. He says he is fearful that he will have to close one of his locations after hearing the Governor does not intend to open dining rooms anytime soon and she did not indicate a date at which she will do so.

Hair and nail salons, fitness centers, night clubs, tattoo parlors and other close-contact businesses will also remain closed until at least May 15. Retailers allowed to open will be required to maintain no more than 50 percent of allowed occupancy and adhere to strict sanitation guidelines. Schools will remain closed to in-person instruction.

Gulf Shores City Council issued its own recommendation for reopening local businesses for limited recreational use only on May 1. Walking, running, swimming, surfing, fishing or other similar activity will be permitted as long as social distancing guidelines are followed, according to the Gulf Shores recommendations. It stated that congregating on the beach and the use of chairs, tents and/or umbrellas would be prohibited until May 15 when all restrictions would be lifted.

“Our belief is that we must collectively develop a gradual and measured approach that can evolve as this situation continues to do so,’’ Mayor Robert Craft said. “This likely includes requiring our businesses reopen under modified conditions and that we all adapt to a new normal for awhile.’’

Ivey emphasized that social distancing is still needed to contain the spread of the coronavirus in the state. Alabama’s infection levels are leveling off, but not decreasing. As of 11 a.m. on April 28, Alabama had 6,580 confirmed cases and 241 deaths statewide.

“The revised order takes meaningful steps to reopen Alabama including our beaches,’’ said Senator Chris Elliott, a member of the state’s Small Business Commission Reopen Alabama Task Force. “The order continues to mandate the closure of restaurants (dining), barber shops and athletic facilities. My hope is that both the Governor and the State Health Officer will revisit this Order soon as conditions continue to improve so that those businesses still ordered closed can reopen.’’