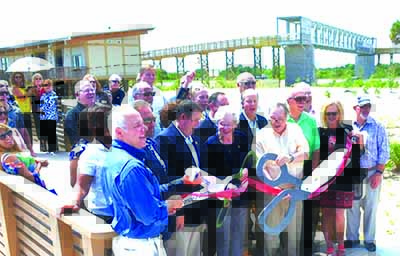 Alabama Governor Kay Ivey got right to the point during the recent dedication of the completed Interpretive Center and Pedestrian Bridge at Gulf State Park.
“There is simply no place like Alabama’s beautiful Gulf Coast, which is why I’m committed to protecting its natural beauty and furthering its growth. The Gulf State Park is a crown jewel in Alabama tourism,’’ Ivey said. “I very much look forward to the success these enhancements will bring.”
Part of the Gulf State Park Enhancement Project, the Interpretive Center and East Pedestrian Bridge are located at 22250-A East Beach Boulevard, adjacent to the GSP Beach Pavilion and create a gateway to the park.
The Interpretive Center is one part of the overall enhancement project. The dune restoration was completed in 2016. The Lodge at Gulf State Park is currently under construction and will open in November 2018. The Learning Campus, which includes overnight accommodations, indoor and outdoor classrooms, laboratories, meeting space and a restaurant that is open to the community, is under construction and will be complete in December 2018.
Divided into three major components, the Interpretative Center includes an open-air porch containing a series of interactive exhibits describing the nine distinct ecologies from the Gulf to the inland forest. A multi-use room is available for use as a gathering space for meetings and other events. The at-grade play area includes shade, a water play exhibit, and sky viewing benches. All of these features are tied together by an elevated plaza that provides stunning views of the Gulf of Mexico. The building also includes public restrooms, bike parking, and amphitheater seating.
The building is the launching point for the newly opened pedestrian bridge that connects the beach to the majority of the park and the 28-mile trail system. This eastern bridge complements the western pedestrian bridge opened earlier this year.
The Interpretive Center is seeking full Living Building certification and will provide 105 percent of its energy, treat 105 percent of its water. If successful in meeting the challenge, the Interpretive Center will be the first of its kind in the Southeast. A series of exhibits in the elevated plaza and multi-use room describe how the building responds to the Living Building Challenge and explores the interaction between nature and the built environment.
The state has contracted Valor Hospitality Partners to operate the Interpretive Center, Learning Campus, Trails and Visitor Enhancements and the Lodge at Gulf State Park, a Hilton Hotel.
Pictured: Gov. Kay Ivey and other local and state officials at the May 25 ribbon cutting for the new interpretative center at Gulf State Park.