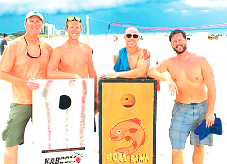 The Gulf Coast Cornhole Series makes its annual stop at the Flora-Bama Lounge & Package on Perdido Key on Saturday, July 20. This is the ninth year the ‘Bama has sponsored the Series, which consists of monthly qualifying tournaments from Ft. Walton Beach to Perdido. The series ends with the September 28 Championship at Windjammers on the Pier Restaurant & Bar in Navarre Beach.
Doubles registration begins at 11 a.m., with play starting at noon in both rookie and masters divisions. A singles tournament begins at 10 a.m., with registration starting at 9:30 a.m.
Win over $1000 in prizes at qualifying tourneys throughout the series, and accumulate points for the Gulf Coast Cornhole Series championship. Over $1000 in cash and prizes given away at the final championship tournament, with the champion teams of both divisions also receiving a set of custom boards. For more info, call (850) 232-3086, go to facebook or email gulfcoastcornhole@gmail. com.
Pictured: The Flora-Bama and The Purple Parrot both hostedprevious Gulf Coast Cornhole Series on Perdido Key.

Related ItemsJuly 3 News
← Previous Story Swanky Gala raises $27,100 for Youth-Reach Gulf Coast
Next Story → “Magnolia or The House at the Head of the River” encore July 12-13 in Foley Play is look at the life of Lower Alabama teen in the mid-1930’s