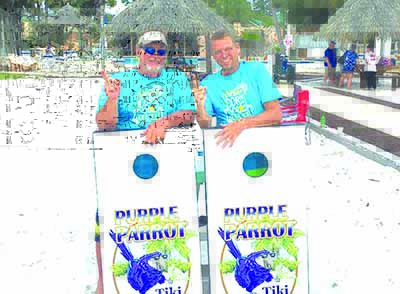 The Gulf Coast Cornhole Series makes its annual stop at the Flora-Bama Lounge & Package on Perdido Key on Saturday, July 21. This is the eighth year the ‘Bama has sponsored the Series, which consists of 12 monthly qualifying tournaments from Ft. Walton Beach to Perdido. The series ends with a September championship tourney on Pensacola Beach.
If you pre-register, it’s $30 per team. Teams that sign up at the registration booth the day of the tournament pay $40/team. Registration starts at 11 a.m and games an hour later in both Rookie and Masters/ACO divisions. Singles tournaments will start at 10 a.m., with $10 registration fee prior to start.
Over $1000 in prizes given out at qualifying tourneys throughout the series, and accumulate points for the Gulf Coast Cornhole Series championship, with $1000 in cash and prizes given at the final championship tournament. For more info, call (850) 232-3086 or email gulfcoastcornhole@gmail. com.
Pictured: Competitors at the 2018 Purple Parrot Tourney.