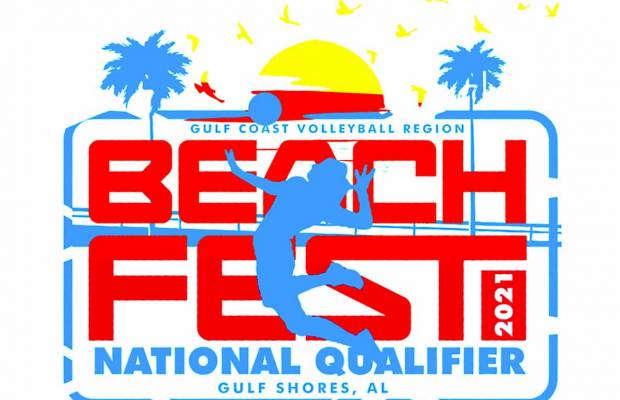 By Fran Thompson
Even if the NCAA decides to limit access into next month’s NCAA Beach Volleyball National Championship to families of players, Gulf Shores Public Beach will still be Volleyball USA for the weekend, as around 470 teams and some of the best U-18 and U-16 players in the country will be playing matches on 48 courts just a few hundred yards to the west of the college matches.
Now in its 9th year, the USAV Gulf Coast Region Beach National Qualifier – Beach Bash ‘21 – will be held in conjunction with the May 7-9 national championship, and it has grown exponentially along with the sport itself.
“Right now it is the largest national qualifier in the nation for beach volleyball,’’ said Beach Region Director Shawn Weaver.
Also, the founder of Pleasure Island Volleyball, Weaver said 440 teams had already signed up when the Covid pandemic shutdown the 2020 tourney.
He said trying to find participating families parking during both morning and afternoon sessions is just one of the logistical challenges, but the Gulf Coast Region’s staff of 20 people supplemented by 20 officials have experience with such obstacles.
There is already a waiting list to get in the tourney, and Weaver is still holding spots for other Baldwin County, Pensacola and Mobile players to finish their indoor seasons. “I think 475 is our magic number with logistics and staffing,’’ he said.
Louisiana is turning into a hotbed for the sport, but teams will come from as far as California, Colorado, New York, Arizona, South Florida and Washington to play this tourney. Three Canadian teams are entered.
Within three weeks of opening registration for this year’s tourney, 400 teams had already registered. And this is from a tourney that drew a total of 15 or 20 teams the first year the USAV Gulf Coast Region hosted it in 2012.
“The next year it was 150 and then 250 and then 350. Nine years later we are way over 400 teams,’’ Weaver said.
Weaver said up to half of the players competing in the U-18 division have already committed to play the sport in college, and around 20 players in the U-16 division have already committed to college programs.
Even not being able to receive their usual free tickets for the NCAA Championships up the beach has not even deterred teams from coming.
Weaver said the tourney’s popularity is a tribute to the Gulf Shores Sports Tourism, the City of Gulf Shores and Gulf Coast Volleyball and their ability to work together.
“People tell us all the time how well this tourney is run. The same with the National Championship,’’ Weaver said.
Many participating teams bypass qualifying tourneys closer to home because they love this area, its beautiful beaches and white sand, the accommodations and the amenities tourney sponsors provide.
So, even without the option of watching the national championship, the sport’s fans will be exposed to national caliber beach volleyball played in Gulf Shores May 7-9.