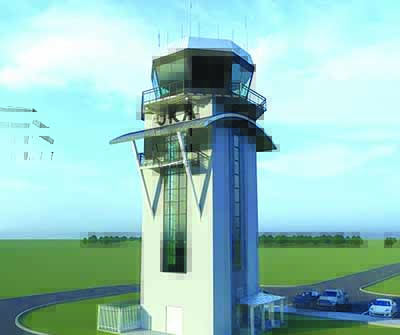 Gulf Shores accepts $5.3 million grant for air traffic control tower
By John Mullen
Gulf Shores Airport Authority officially accepted a $5.3 million from the Federal Aviation Administration to fund the building of the first air traffic control tower in Baldwin County.
Also, during the joint work session-regular session, the council approved the annual repaving schedule for city streets and will spend abut $850,000 on those projects this year.
“This is to accept an FAA grant of $5.3 million for the construction of a new air traffic control facility at the airport,” Airport Authority Manager Scott Fuller said. “Good news about this grant is typically, they’re 90 percent. This one is a 100 percent grant. The $700,000 we had set aside for our share of this project will be reallocated toward a future airline terminal building.”
Bids for construction of the tower will be opened in July and Fuller says the goal is to have it finished by July of 2021.
“With this we will rank as the second busiest tower in Alabama behind Birmingham and basically, we are already the second busiest airport,” Fuller said. “Nationwide we will rank as the 40th busiest of 256 facilities nationwide. They recognize the need for that facility.”
Fuller said the tower will bring in safety features needed at Jack Edwards Airport.
“Typically, at this airport you talk on the radio but at this airport it’s not required,” Fuller said. “With a tower you cannot come within four miles of the airport without permission.”
Added safety features will include single runway operation, proper spacing between the aircraft in the air and on the ground, coordination of arrivals and departures with local traffic and regulatory enforcement support.
Efficiency improvements include reducing go arounds caused by congestion, reducing runway incursions, coordinate arrivals and allows consecutive approaches to the airport thus reducing costly holding patterns and delays.
“Runway incursion is when one aircraft is trying to take off while another is in the process of landing,” Fuller said. “That’s a main safety concern of the FAA. Right now, there are a lot of days when we have a north-south routine going and an east-west at the same time. This makes the patterns over cross each other. It’s not a very safe condition. Around here it’s see and be seen. Once the tower is in operation that will cease. It will not allow that to happen.”
The tower will be located in the southeast corner of the intersection of the two runways at the airport, Fuller said.

“Every year we let bids for various roadway improvement projects in the city,” Public Works Director Mark Acreman said. “This year we’re recommending awarding the 2020 bid to Asphalt Services in an amount not to exceed $850,000.”
Bids were opened on May 7 and is a unit price contract for work including resurfacing, widening, seal coating, restriping and repairs as needed.
Included in the project is resurfacing in Craft Farms north to finish up work that has been going on for several years. On the east side of town work is planned on East Third Street and East 21st Avenue, Acreman said.
“West Fairway we’d like to continue the work we started this year on Wedgewood and resurface the continuation of that roadway down West Fairway Drive all the way back to Fort Morgan Road,” Acreman said.
In an area south of Fort Morgan Road and west of State Route 59, West Second Street, Hilltop Drive, Oak Ridge Drive, Yupon Drive, Sunset Drive, Magnolia Drive, West First Street, West 12th Avenue, West 13th Avenue and West 14th Avenue need work but not a complete repaving.
“We’ve got a whole selection of roads in and around the Hilltop area that are in really good shape,” Acreman said. “They just have a little bit of weathering and oxidation because of their age. Those particular roadways we would like to seal coat those and extend their life expectancy before they are subject to any kind of structural degradation. This would be a brand-new seal coat on all those roads and it would seal in the aggregates and we’d restripe those as well.”
Other roads getting work will be West Third Avenue, Creekview Avenue and West Fourth Street in the West Beach area. Mayor Robert Craft asked if some of the roads not mentioned were badly in need of repairs could the work be shifted to get those fixed.
“We have the ability to move those funds around as needed on the worse of the worst roads,” Acreman said. “Should a road be brought to our attention that is in a more severe state than the current list then we absolutely can prioritize that road. We do have some funding available. We have $850,000 but the bid is for $843,000 so we have $7,000 there. We always build in a substantial amount of contingency, about 10 to 15 percent into our bid packages when we let these out. So, we do have contingency funding that we could appropriate to some of these other roads being brought to our attention.”
During the session, the council also reappointed Vic Roberts to a six-year term on the Airport Authority Board and took over rights of way and maintenance for five streets in the Colony subdivision on Fort Morgan Road.
Also, at the end of the meeting City Administrator Steve Griffin said more city facilities were opened per Gov. Kay Ivey’s new Safer at Home order relaxing some restrictions due to the pandemic. Those inlude the Gulf Shores Sportsplex, Kids Park playground, Meyer Park playground,
· Skate Park, all picnic pavilions, outdoor fitness equipment, public restrooms, benches and picnic tables.
Pictured: Rending of the Gulf Shores Airport Traffic Control Tower, which will be the first in Baldwin County upon completion in 2021.

Due to the extended closure of the Bodenhamer Recreation Center, Gulf Shores was able to successfully expedite renovations for the pool that were originally planned for Fall 2020. The project began in late April and is expected to be completed by the end of July.
“We are very proud of these efforts to minimize future facility downtime while taking advantage of the closure to make these much needed pool improvements,’’ said said City of Gulf Shores Recreation Division Manager Nicole Ard.
“The project will include: removing all concrete decking and drainage, replace with new improved drainage system, new tile deck, replace drainage in all locker rooms, new tile flooring in locker rooms,’’ Ard said.
Pool members will be able to use the Orange Beach Aquatics Center for exercise swimming only. Recreation Center members will need to show proof of membership at the Orange Beach facility in order to enter. For more information regarding the aquatics center including hours of operation, please visit their website or call 251-974-7946.