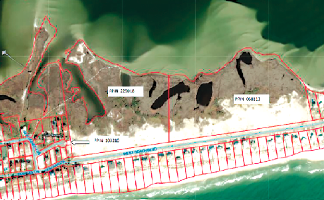 By John Mullen
A project first awarded grant money about three years ago to acquire and preserve land on Little Lagoon in Gulf Shores is finally moving forward.
“It was first awarded in 2016 to the Department of Conversation and Natural Resources,” Environmental and Grants Coordinator Dan Bond said. “The state asked the city to take the project and implement the project. We worked through the agreement with the state and the property owner. It took a while to get here but we’re here now and happy to execute the purchase agreement and look toward acquiring the property. Once we acquire it, we will be in the process of restoration and management.”
Part of that process will be to restore and protect wildlife areas. There are about 53 acres there with 6,100 feet of shoreline on Little Lagoon. The entire project will cost about $4.4 million and the land is being purchased from and with the help of the Erie Hall Meyer Charitable Fund.
The cash sale price is $3.4 million and accepting a grant and deed of gift from the Meyer Fund for the balance between the seller’s appraised current market value of the property and the 2016 appraised value of the property for a grant $2.2 million.
At the June 24 regular meeting the Gulf Shores City Council voted to accept and administer the NRDA through the state as well as the contribution from the fund.
“There’s a lot of critical habitat on the property,” Bond said. “There is dune habitat as well as wetlands habitat both of which are critical for the lagoon area. We look forward to working with the state and U.S. Fish and Wildlife to restore and protect that property.”
There are some public uses planned once the project is complete but they will be designed with those sensitive natural habitats in mind.
“There will be limited, passive public recreation opportunities,” Bond said. “We’re going to work with local stakeholders and residents in the area to make sure that we are creating something that is a benefit to the area and does not have negative impacts on adjacent properties. But we do want to provide some access to the natural resource. That will probably take the shape of a kayak launch, perhaps a fishing pier of some kind but definitely low-impact recreation.”
This could also include a parking area and restrooms, Bond said.
“The property I believe by right could be subdivided into 38 parcels so we feel like this is an opportunity to really protect the natural habitat that’s on the property and have something that’s going to be an amenity for residents and visitors,” he said.
This plan is keeping with an effort in the city to preserve natural areas including the $8.3 million purchase of a combined 836 acres in Bon Secour and on Oyster Bay with a National Fish and Wildlife Foundation grant. Two Restore grants coming to the city also have an eye on the environment with a $5.9 million Little Lagoon Restoration project and the $9.7 million Gulf Coast Center for Ecotourism and Sustainability planned on city land adjacent to Gulf State Park.
“It’s all part of the plan to utilize the funding that resulted from the oil spill and help protect the environment moving forward,” Bond said. “We’re excited and we’ve got a lot of work to do now. We’ve identified our grants and now we’re in the process of executing all the grant agreements and getting the funding straight. Now we’ve got to get to work which is going to be fun.”
On the Little Lagoon the project will restore and improve about 2,500 acres of habitat including 1,000 feet of living shoreline, improving connections to the canal system and converting about 200 septic systems and connect them to the city sewer system. It also aims to restore shellfish and marsh areas, conduct ecological research and implement long-term monitoring.
During the meeting, the council also:
• Heard a report from Christie Strategy Group on the recently completed session of the state legislature. The report said positive results for the city included stopping legislation that would ban cities from banning single-use plastic items, the gasoline tax to improve infrastructure, a local constitutional amendment forming a Baldwin County Beach Express Toll Road Authority and the failure of a bill to disallow city regulation and taxation in police jurisdictions.
• Accepted a final report from Grant, Sanders & Taylor accountants on the auditing of the 2018 fiscal year budget.
• Agreed to add Paula Teipel as a signatory accounts involving the Library Advisory Board. Teipel is replacing Judy Watley as treasurer of the board.
• Approved a contract with Olsen Associates for $50,000 to perform annual beach survey and report. Annual monitoring and surveying are required by FEMA to maintain reimbursement eligibility.
• Approved installation of stop signs in the Andhurst Walk Subdivision at the request of residents.
• Approved a change order of just under $10,000 for streetscape grading, median, and sidewalk improvements on beach road to Cunningham DeLaney Construction.
• Approve a change order in sidewalk work from West Lagoon Ave to West Sixth Street. During the project, several additional work items were requested of McElhenney Construction. These additions, along with the final adjustment of unit bid quantities resulted in a final contract amount of nearly $480,000 after an increase of about $43,000.
• Approved annexation of a lot owned by Kenneth Higginbotham at 7032 Boggy Branch Lane. The lot is north of County Road 8 and west of State Route 59.
• Passed a resolution of support for the Tri-City Community Foundation and Execute Field of Interest Non-Endowed fund agreement to establish the disaster relief fund.
• Reappointed Mary Wayne Gilmore to the Beautification Board and approved new members David Mayfield as chairman replacing Evelyn Sanders and Matt Lumpkin as a board member replacing Jimmie Van Valkenburg.