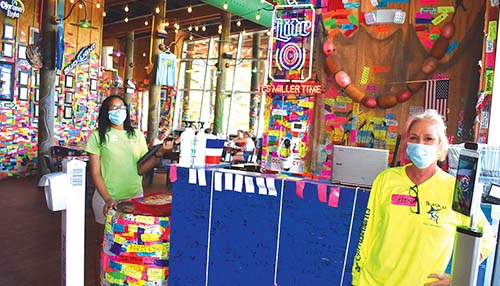 Gulf Shores fire & police will be spot checking business enforcement of social distancing order
By John Mullen
With an eye on keeping the beaches open as COVID-19 cases in Baldwin County spike, Gulf Shores fire and police departments are keeping a close watch on restaurants and retail businesses to ensure they are adhering to the Gov. Kay Ivey’s order on social distancing.
“We’re making a statement and showing concern and showing that we support what the governor’s doing and making sure we’re doing everything we can to keep everybody safe,” Mayor Robert Craft said. “We’ll be doing that going forward as long as the rules are in place. Periodically spot checking.”
Craft made those comments during a recent council meeting.
Gulf Shores began the new enforcement of the governor’s rules on the Fourth of July holiday weekend.
“We issued a zero-tolerance requirement and enforcement for the governor’s Safer at Home compliance,” Craft said. “We had numerous examples presented to us of people in restaurants where servers were not appropriately wearing masks and where there were a lot more people in there than capacity would have allowed for.”
Craft turned to Fire Marshal George Surrey to do the checking and a Gulf Shores police officer accompanied him on those visits to local businesses.
“Fire Marshal George Surrey who does all the inspections for all of the compliance for new construction on restaurants, we asked him and a police officer to go and monitor what was going on in each of those as well as from the retail businesses that didn’t have enough face masks for the general public,” Craft said.
“With George having the relationship with all these folks having approved their restaurant sites and has worked with every one of them to set up six-foot distancing because capacity in restaurants is not a number. It’s how many seats can you put in there and keeping six-foot separation from each other. They don’t have a number to count to but they have to just make sure everything is going the right way.”
Surrey told the council that his efforts were met with cooperation from city business owners.
“We’ve had good feedback from restaurant managers,” Surrey said. “Basically, we visited restaurants, food service locations and retail establishments. If we observed violations of the current governor’s order, we show them what we observed and they correct it immediately usually. We haven’t had anyone yet not.
“We still issue them a warning letter and notify the Alabama Department of Public Health. If we observe it, we also let the health department know that we see a violation because it is their jurisdiction to enforce that.”
The council also:
• Agreed to placing two antennas for the police department at the main station and at Veteran’s Road on Fort Morgan Road to help in areas where radio contact is a bit spotty, Police Chief Edward Delmore told the council. Baldwin County is paying for the antennas and there is no cost to the city.
• Agreed to the Acceptance of Craft Farms North Phase 3 Subdivision rights-of-way improvements excluding utilities and common. The streets included with this recommendation are partial acceptance of Craigend Loop, Ladybank Street and Alton Street and full acceptance of Gyaws Avenue.
• Agreed to award 34th Avenue traffic signal poles and mast arms equipment bid to Southern Lighting and Traffic Systems in an amount not to exceed $49,200. This intersection on State Route 59 is just south of Cotton Creek Drive and will serve as the entrance to the new freestanding Emergency Room to be built nearby.
• Rejected all bids on the Fort Morgan trail improvements. A mistake was discovered in the specifications. A grant from the Alabama Department of Economic and Community Affairs will pay for 80 percent of the work or $400,000. The city still expects the work to be completed in 2020.
• Appointed City Clerk Wanda Parris to prepare a list of qualified voters for the upcoming Aug. 25 municipal election.
Pictured: Keen Pearson of Tacky Jack’s Gulf Shores stands next to one of the temperature screening kiosks that Tacky Jacks has procured for each of its three locations.