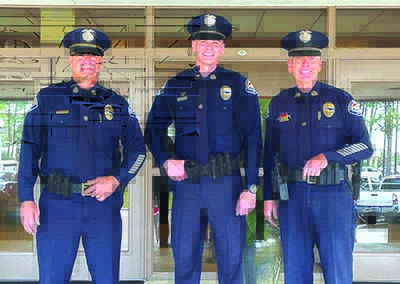 Gulf Shores Honors Police Officer Justin Schulz
Officer Justin Schulz was named 2020 Patrol Officer of the Year. Officer Shultz, 30, haa with GSPD since 2014, and he and wife Raegan have three sons. Officer’s Schulz responded to 799 calls for service, made 28 arrests (five for felony charges), issued 52 traffic citations and 30 warnings. He received the award for Officer of the Month in February, August and December of 2020. In addition, he serves as a Field Training Officer and a member of the SWAT Team. Beyond that Schulz effectively applied his knowledge about trauma and injuries at least twice in 2020 rendering life sustaining aid to two different stab victims in two separate incidents. Officer Schulz’s values, courage and constant willingness to learn continue to make him an outstanding servant to the Police Department, the city and most importantly to the citizens at large. (By Chief Edward Delmore). Pictured: From left, Deputy Chief Dan Netemeyer, Officer Justin Schulz, Chief Edward Delmore.