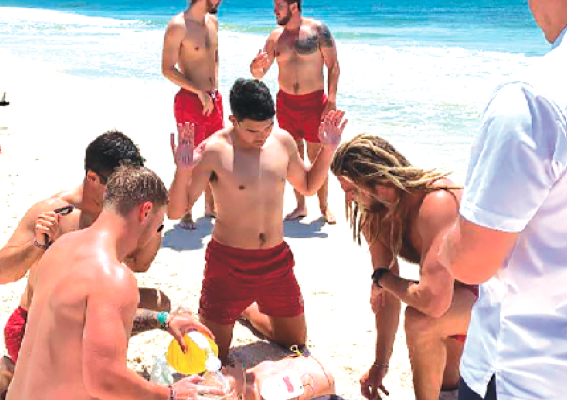 By John Mullen
Gulf Shores Deputy Fire Chief Keith Martin said when Melvin Shepard was hired to head up the Beach Safety Division, he was charged with raising the standards of lifeguard crews.
“We were able to have Melvin come in and help us achieve a goal,” Martin said. “The goal we had set for them was to become an advanced agency.”
During the May 28 council meeting Shepard said that goal has been achieved. Sadly, the announcement came a day after 21-year-old Edwin Perez drowned trying to save his cousin, family members said. The cousin survived.
Shepard said crews ended a busy weekend rescuing 32 people from the Gulf with 20 of those coming at the main beach at Gulf Place.
“This weekend alone we estimated about 160,000 on the beaches of Gulf Shores,” Shepard said. “They conducted 4,000 personal contacts and over 2,000 lectures where they spoke to families about the danger of rip currents and surf conditions. We had 35 major medical calls on the beach, 31 missing children, and five missing adults.”
So far this year Gulf Shores crews have had a total of 72 rescues.
“A rescue is defined as someone who should have drowned or would have drowned if a lifeguard was not there to remove them from the water,” Shepard said. “That’s not somebody that’s out on a float in the water and we just assist them back to the beach.”
The new designation for Gulf Shores makes it one of only 54 in the country out of 154 lifeguard agencies and only one of four, including Orange Beach, on the northern Gulf Coast. Destin and Pensacola also have advanced certifications.
“What that represents is the additional training all the lifeguards must have,” Shepard said. “It’s 48 hours of additional medical training in lieu of CPR and first aid. Those are required. We currently have five licensed paramedics, three advanced EMTs, two basic EMTs and two other of our lifeguards have signed up to take basic EMT courses this summer.
“Two of the beach trucks have advanced life support equipment and cardiac drugs so we can run any life support call out on the beach without having to call the fire department. We will call them when we need their help as we did on Sunday with an incident.”
Shepard said lifeguards work nine and a half hour days and man 10 towers from the Gulf State Park pavilion to Little Lagoon Pass. There are also four roving lifeguards riding ATVs.
“What these young men and women do every day is not an easy task,” Shepard said. “They are out there dealing with the heat, the stress, the environment of all the people that are on their beaches. When this code X was issued (May 27) for the missing swimmer, we have five of our lifeguards that were off duty enjoying a day at the beach jump in and assist without having to be asked to do it. They just did it because it was the right thing to do.”
15 rescues in Orange Beach
Orange Beach Safety Director Brett Lesinger said spring wasn’t busy as normal for the most part for his lifeguard crews but that also changed this weekend.
“This beach season had a slow start for spring break with small crowds and cold water,” Lesinger said. “We have seen huge crowds roll onto the beach for special occasions like Memorial Day weekend, Mullet Toss, local concerts, and holidays but not consistent crowds throughout the year though.”
He said his crews conducted 15 rescues over the long weekend and all were related to rip currents. There were also eight water assists, 11 medical aid cases, 325 preventive actions, four missing people (all found safe), two transported to the hospital and 996 public contacts. So far in 2019 Orange Beach has had 31 rescues and 46 water assists.
During the May 28 Gulf Shores regular session, the council also:
• Passed Budget Amendment 2 which included $5.7 million for phase one of the Gulf Shores school system improvements.
• Agreed to an annexation of 42 acres located north of County Road 8, between Grund Lane and Viola Road. The applicant is requesting single-family residential zoning with about 82 lots.
• Approved reappointment of Jessica Sanders and Ken Kichler to the Bicycle and Pedestrian Advisory Committee.
• Agreed to annex property is located at 6487 Schoel Lane that is occupied by a single-family house. The applicant indicates the reason for annexing is so his daughters can attend Gulf Shores City Schools.
• Agreed to an annexation request from Mr. and Mrs. David Watts seeking to annex their home located at 19045 Stout Lane. The applicant indicates the reason for annexation is to be a part of the Gulf Shores City School System.
• Agreed to an updated maintenance agreement from the Alabama Department of Transportation for the continued maintenance of the proposed sidewalks and pedestrian crossings that are being installed as part of the Coastal Gateway Boulevard Improvements.
• Amended an ordinance to install four-way stop signs at the intersections of First, Second, Third and Fourth Streets. Residents made the request and after a Public Works study it was agreed the increased traffic and pedestrian presence at the side streets now because of new traffic signals and pedestrian crossings added on beach road. A police department review agreed with the assessment.
Pictured: Gulf Shores lifeguards training to earn advanced certifications. Orange Beach and Gulf Shores are two of only four lifeguard agencies on the northern Gulf Coast that have advanced certifications.