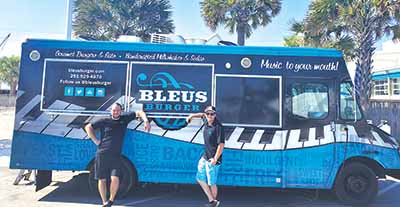 By John Mullen
The Gulf Shores Planning Commission voted to postpone amending the zoning ordinance to make food trucks a permanent part of the code. The commission will take the possible ordinance change again in its January 2021 meeting.
In December, the commission and city council came up with a 12-month pilot program for allowing food trucks to operate under certain regulations and issuing a maximum of 10 permits.
Ryan Shamburger, general manager of Big Beach Brewing asked the commission to go ahead and vote now on writing food trucks into the ordinance instead of waiting for the program to end in December of 2020.
“I want to get this amendment passed while the summer is happening so we can feed the hungry people,” Shamburger said. “We have hungry people here visitors and locals and I think this is a good option to allow this to move forward.”
Shamburger said that the Hangout has been operating a food truck for five years serving soft-serve ice cream and snow cones and the Alabama Gulf Coast Zoo currently operates three food trucks at its new location. He also noted that with the pandemic restriction of limiting restaurant seating to 50 percent capacity, the food trucks offer a different option and can ease the crowding at local eateries.
“This application was really motivated during the pandemic and the fact that there was a large demand for food trucks and what they offer in open-air dining, a way to socially distance,” Shamburger said. Shamburger said he is looking into buying a food truck as well.
The commission voted down the request 7-2 will Chairman Bob Steiskal, Pete Vakakes, Matt Young, Jim Eberlein, Philip Harris, Frank Malone and Dean Long voted for the postponement. Bill Eubanks and Jennifer Guthrie voted no.
“A lot of the things that you’re suggesting are really going to be part of the pilot program,” Steiskal said. “That’s one of the primary purposes for the pilot program to have been suggested. And I think it’s a foolish quite frankly that we are being asked to throw that procedure aside in favor of making these various articles permanent at this point.”
City planner Andy Bauer and staff made a good case for the food trucks being in the city but also recommended the study be completed through the pilot program.
The pilot program serves as a feasibility study to generate data so the city can analyze the positive and negative aspects of having food trucks in the city for a year, Bauer said.
The program allows for a total of 10 permits operating in non-residential zones, the business must operate on private property where another business is already operating and they are not allowed on public property or any public right of way.
Under the specific-use section, it would add to the ordinance the current food truck pilot program rules but will eliminate an expiration date on the program, have no restrictions on how many permits are issued and remove limitations on hours and days of operation. Under the modifications, it would add food trucks as a “by-right” use in all areas of the city that are nonresidential.
There have been seven permits issued operating at three different locations, Big Beach Brewing, Island Girl retail store and Pier 33 Grocery on West Beach.
“Staff believes additional time is needed to fully understand and analyze the impacts of mobile food trucks in our community as well as the needs of operators and patrons,” Bauer told the commission. “Near the end of the pilot program we’ll prepare an evaluation report, we’ll survey and interview pilot program participants, brick and mortar restaurants as well as local residents.”
The city will ask if the pilot program worked, what were positive and negative results and if the program sparked economic growth and pedestrian activity where they operated.
“These are just a sample of some of the questions we would ask,” Bauer said. “Obviously, we would a lot more in-depth survey to obtain hopefully, any and all input that we can possibly get. While staff is generally supportive of the mobile food unit use, we recommend that the planning commission table this amendment until the January 2021 planning commission meeting to allow the mobile food units pilot program to run its course over the 12 months. We’ll be able to determine what, if any modifications need to be made to this pilot program.”
Talk of food trucks in Gulf Shores began about three years ago but that first effort stalled.
“Back in 2017 staff started getting a lot of input from local citizens, food truck owners and potential food truck operators about allowing food trucks in the City of Gulf Shores,” Bauer said.
In the discussions, standards were developed for a food truck program, meetings were held with stakeholders and the program was presented to the planning commission and city council.
“In 2017, a lot of the brick and mortar restaurant owners had quite a few reservations about the food truck pilot program,” Bauer said. “They thought it was a little bit unfair to allow food trucks to come in and potentially take the cream off the top. Also, they thought that as a mobile unit they don’t have near the operating expense as restaurant owners. At that point in time, neither the planning commission or city council endorsed the food truck pilot program and it was put on hold.”
In late December of 2019, there was another effort to get food trucks into the city. As a result, city planners developed upgraded standards for a food truck program and in meeting with stakeholders reached a compromise to allow a 12-month food truck program. It was approved by the city council on Dec. 9.
Pictured: The Bleus food truck has made regular stops at Big Beach Brewing Company this summer. Bleus Burger also has a popular brick n mortor restaurant at Pelican Place. To book the “Burger Slingin’ Wagon” call 251-948-2538 or email info@bleusburger.com