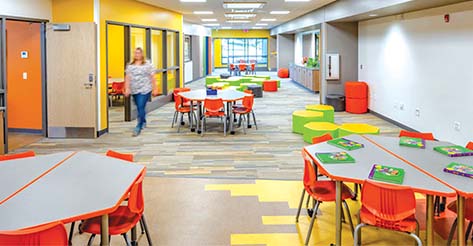 By John Mullen
Gulf Shores OK’d a $3.3 million classroom addition to the city’s elementary school during the July 27 council meeting. This comes on the heels of a $5.6 million project at the high school to and improve existing athletic facilities approved in June.
“The school board has identified the need for elementary school expansion so the school board with the superintendent sent out a request for a proposal and got four different teams of bids to do architectural services,” City Administrator Steve Griffin said. “Their recommendation to you all is that we authorize the contract Walcott, Adams and Goodwyn, Mills and Caywood in an amount not to exceed $313,530.”
Before opening for its first year in 2019 the city spent about $8.6 million to improve traffic flow, parking, playgrounds, gym renovations, roof repairs and air conditioning repairs. It’s part of nearly $20 million available to the schools.
“The school board has identified about $19.4 million worth of capital funding available for school construction,” Griffin said. “The council had authorized a line of credit for $17 million for a 20-year period and the state board superintendent has informed me that he’s identified $2.4 million that will be available. That’s the total of $19.4 million.”
The three projects have a combined cost of $17.2 million. The classroom project bid will go out in July of 2020 with construction starting in October and a target opening date for the 2021-22 school year. The design process and review of the design will take place in August.
“It’s an aggressive timeline but it’s something that’s definitely needed at the school,” Economic Development Coordinator Blake Phelps told the council. “Staff has been working on this for several months now trying to plan and come up with the concept that they feel like is best utilizing what’s needed on campus.”
New classrooms will be built between two existing buildings on the campus and could eventually contain 12 new rooms.
“The board of education going into last year understood already that there was some capacity crunch at the existing elementary school,” Phelps said. “Part of what they did immediately was reconfigure the grades within the elementary school which is PreK-5 grades and shift the sixth grade back to the original configuration of sixth, seventh and eighth at the middle school. That helped free up some capacity within the elementary school but with the existing growth and projected continued growth there are some need for capacity at the elementary school within the existing campus. That’s what this project is going to address.
During the project, all portable classrooms will be removed from all schools in Gulf Shores, a new 21st Century Leaning Environment will be started and it will create flexible, collaborative STEM/STEAM learning spaces.
“It’s a completely different approach to learning,” Phelps said. “It’s much more of a dynamic situation. Learning occurs throughout the classroom and throughout very dynamic spaces, flexible spaces. Not in a lecture based where you sit down and everyone listens to the teacher. It’s more student centered, experiential based learning.
Some of the rooms will have movable walls so you can combine two classes and it will have flexible seating and furniture arrangements different from the traditional style lecture and teacher orientation.
“It will take advantage of space outside of the classroom in the corridors and really create learning opportunities anywhere within that school including outside in an outdoor learning courtyard including some windows or rollup garage doors where it can be an indoor-outdoor learning area,” Phelps said.
The current plan is to add at least eight classrooms but there’s it could be expanded to add more.
“What we have is an eight-classroom addition with an optional plan to add four more to make it 12 classrooms,” Phelps said. “The location will just south of existing elementary 400 building and just to the east of the existing 300 building out toward the existing bus loop.”
At the high school, the locker room space will be reconfigured and some current storage areas utilized to have spaces for all the basketball, volleyball and wrestling teams. An athletic training area will be added as well.
A new practice gym will be built west of the current gym and serve as an entrance for events at both gyms. The existing gym will get new bleachers, the floor will be refinished and new logos will be added throughout.
Also, during the meeting, council:
• OK’d an agreement between the city, Gulf Shores and Orange Beach Tourism’s Sports Commission and the Alabama Independent School Association to continue having the group’s state track meet in Gulf Shores in 2021 and 2022. Gulf Shores has been the host city for the AISA’s track championship since 2017. The city also hosts the AHSAA state championships and the NAIA’s national championships each year.
• OK’d additional stop signs at West First Avenue and West Third Street, West Second Street and Commerce Avenue and Wedgewood Drive and West Fairway Drive to slow down traffic in those areas.
• OK’d a contract with WAS engineering to design the landscaping and irrigation for the Beach Walking District project. “We requested a proposal from WAS about design services related to landscaping and irrigation on the beach walking district improvements that we are currently under design by Volkert,” City Engineer Mark Acreman said. “The plans are now 90 percent complete and we know have the locations for landscaping and irrigation identified. The beach walking district is a key goal in our Vision 2025 Strategic Plan that includes increased walking areas and on-street parking. Overall, it’s a $2 million project with $1.9 million of that in various grants.”
Pictured: Capital improvements that are part of the most recent $3.3 million Gulf Shores School project include introducing a 21st century learning environment where education is student centered and experience based rather than teacher centered and lecture based by utilizing flex break-out spaces, collaborative corridors and