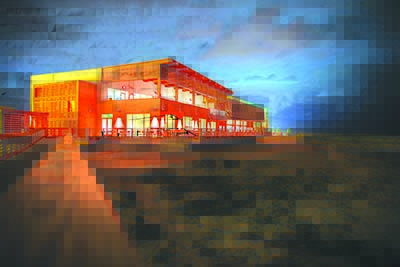 It promises to be a special year for Gulf State Park and its brand new lodge.
Rrecently named Attraction of the Year by the Alabama Tourism Department, The Lodge at Gulf State Park, a Hilton Hotel, opened in November 2018 and just last weekend hosted Governor Kay Ivey’s Gulf Coast Inaugural Celebration featuring country music star Neal McCoy.
Conservation Commissioner Chris Blankenship says the Attraction of the Year designation is a high honor. “One reason the Alabama Tourism Department made this designation is the environmental sustainability the park is embracing,” Blankenship said. “Restored sand dunes, a rainwater recycling system and lighting favorable to wildlife are just some of the things that make the park ecofriendly.”
The park’s 600,000-plus annual visitors have access to an array of recreational opportunities throughout the park’s 6,150 acres. Other lodging available includes 11 cottages, 20 cabins and 500 campsites.
In addition to direct access to more than 2 miles of pristine beach, the GSP guest experience includes 28 miles of hiking and biking trails, a nature center, programs about local wildlife, a saltwater fishing pier and a new interpretive center.
Gary Ellis, Director of Community Relations and Administration at GSP, said The Lodge opening is not the end of improvements at Gulf State Park. A Learning Campus is currently under construction and will open later this year.
“The park’s many different habitats, such as forest, wetlands, dunes, freshwater and saltwater provide a unique opportunity to provide more educational programs,” he said. “The Learning Campus will host camps and retreats, educational conferences and workshops for all types of groups. Longer term, plans are underway to expand trails and group camping sites.”
Gulf State Park consistently receives high reviews on the visitor experience website TripAdvisor.com. Because the park received Certificate of Excellence ratings five years in a row, it was awarded Hall of Fame recognition in 2018.

The fanfare that accompanied last week’s ribbon-cutting ceremony to officially open The Lodge at Gulf State Park, a Hilton Hotel, was unprecedented, a fact affirmed by a pair of experts in the field of lodging and hospitality.

With Governor Kay Ivey headlining a long list of dignitaries at the grand opening of the long-awaited facility, the Gulf Shores High School marching band played the National Anthem as Gulf Shores Navy JROTC cadets presented the colors in front of the large crowd that gathered only steps from the white-sand beaches of the Gulf of Mexico.

One of those dignitaries was Gulf Coast Convention and Visitors Bureau CEO Herb Malone, who was curious if other venues celebrated the opening of similar facilities the way Alabama did last week.

“I asked the head gentleman from Valor Hospitality and the head gentlemen of Hilton Hotels if they had ever been to a ribbon-cutting where there was this much passion, love and energy behind a project,” Malone said. “They both said never, ever have they seen anything like this.”

Malone said he knows of several groups that have scheduled conferences at the new Lodge, including Jon Hand, CEO of Electric Cities of Alabama, a group that represents municipally owned utilities that serve about 1 million customers in the state. Hand jumped at the chance to book a conference at The Lodge.

“I grew up in Gulf Shores. We went to the State Park a lot growing up. So, we were really excited about the completion. I think it’s going to be great for Alabama. The location of the resort is great for us. The way the resort looks – it’s beautiful. It’s a great asset to the state. Whenever we can do business in Alabama, we like to do so. Our 35th anniversary will be our first conference at The Lodge.”

Chris Blankenship, Commissioner of the Alabama Department of Conservation and Natural Resources, said the decision was made to forego the typical soft opening that new facilities hold before a general opening.

“Many of us were not sure if this day would ever come,” Blankenship said. “It has been a long journey, and I’m so glad to share this with you as we celebrate the work of so many who made the opening of this lodge a reality. This is truly a spectacular place.

“With the project’s high visibility and excitement in this community for the return of The Lodge, we wanted to open it as soon as possible to give the communities an opportunity to participate in the rebirth of this place. So, we opened the doors at the first possible moment.”

The Lodge will accommodate up to 1,000 people for conferences and conventions with a 350-room hotel that includes 20 suites. The beach-view ballroom is 12,160 square feet with an adjacent 7,500-square-foot outdoor terrace. Several other smaller meeting and conference rooms are available. A Gulf-front infinity pool will have a pool bar and grill. Meanwhile, a Gulf-front restaurant features terrace seating and a private dining room that will serve house-prepared dishes sourced from regional suppliers, including fresh Alabama Gulf Seafood.

The Lodge has been constructed under LEED (Leadership in Energy and Environmental Design) protocols. The Interpretive Center is pursuing certification under the Living Building Challenge, a designation currently afforded to only 16 buildings in the world.

“We are caretakers of this creation,” Blankenship said. “The sustainable construction and the environmentally friendly management of The Lodge show how serious we are about that responsibility. We are very excited about how we can have this beautiful facility and still protect our environment.”

Most of the dignitaries who spoke at the ceremony were able to share memories of cherished family time spent at previous versions of the Gulf State Park Lodge, including Alabama U.S. Congressman Bradley Byrne, who marveled at the hotel facilities.

“Did you see the suite with the separate room with bunk beds and a TV?” Congressman Byrne asked. “That is perfect for a family. I wish they had had those when we used to stay at the park when my children were small. We definitely would have taken advantage of that.”

State Representative Steve McMillan, R-Bay Minette, who represents the district that includes Gulf State Park, said he is greatly relieved to see the new facilities open because of the numerous hurdles that had to be overcome to rebuild the lodge after Hurricane Ivan destroyed it in 2004.

“It’s just a dream come true,” Rep. McMillan said. “It’s better than I ever envisioned that it might be. And one thing most people don’t realize is that we came within three days of having to shut down construction while we waited on a court ruling. The judge finally ruled in our favor, and here we are today.

“I never had any idea we would have anything like this. It’s just unbelievable.”

Alabama Speaker of the House of Representatives Mac McCutcheon, R-Monrovia, reiterated how the resort facilities at Gulf State Park factor into the economic well-being of the rest of the Alabama State Parks System.

“When the resort was here, and the lodge was up and running it was an economic engine to help all our state parks,” Rep. McCutcheon said. “So, when we lost this facility, it had a huge impact on our parks. When we came for a tour of the construction site, we walked out on the dunes, and I remember my children being there on the edge of the water when they were very, very little. Deb and I made a trip down here, and we stayed at the lodge that was here at the time. That was the first time my children got to feel the sand between their toes and feel the waves wash up on them. We built sandcastles. That was the first time for children who were raised in red land cotton fields to see what it was like to stand on the side of the Gulf of Mexico. That’s a great memory.

“Our best days are ahead of us in Alabama, and this great facility is symbolic of that.”

Governor Ivey echoed the sentiment that the opening of The Lodge has been a study in perseverance.

“I’m thrilled to be here to have this grand opening that we’ve been waiting a long time to have,” said Governor Ivey. “There’s just no more beautiful place than Alabama’s Gulf Coast with the white sand and sparkling waters. That’s why I made it my mission to protect this part of the state and grow it. In 2004, Hurricane Ivan came through and damaged parts of our great state. It also destroyed a very special spot on the Gulf Coast – the lodge. However, in the resilient spirit of Alabama, we find a way to make good out of a bad situation.

“And here we are today. I am proud to be with you for the ribbon-cutting for The Lodge at Gulf State Park. This will be a centerpiece for this area but also for the great state of Alabama. We’re located on the doorstep of the Gulf, and this will be a way to show a piece of Alabama to the world. Creating a new conference center has long been a part of discussions throughout numerous administrations. As Lieutenant Governor, I was a member of the Gulf State Park Committee. Today, I’m proud to take us across the finish line.”

“There is so much to love about this state,” Governor Ivey said. “In this area, it’s our beautiful natural resources, especially our people. I really want to thank the locals in this area, who year-round, continually welcome visitors to our great state.

Governor Ivey said that more than 20 years ago Mercedes became the game-changer for our automotive industry, and she expects the same impact from The Lodge at Gulf State Park.

“Gulf State Park will be a world-class place to visit, and it will be the crown jewel of tourism,” said Governor Ivey, who presented Gulf State Park Project Manager Tye Warren with a certificate of commendation during the ceremonies. “People from around the world will want to come experience what we have in Alabama. I look forward to continued growth in the tourism industry. Thank you for allowing me to join you for this great event. May God continue to bless each of you and the great state of Alabama.”

After he was presented with the certificate from Governor Ivey, Warren’s young daughter jumped into his arms.

“As I hold my daughter, I will tell you there have been a lot of people who helped raise this place,” Warren said. “Thursday night, I listened to Valor Hospitality’s CEO talk to 200 employees, and the feelings I had were closure and complete comfort in what this is going to be. And I hope when my daughter marries that I have the same feeling on that day. I feel great about where this is going.”

PHOTOS: (Billy Pope) Alabama Governor Kay Ivey joins numerous dignitaries to cut the ribbon to officially open The Lodge at Gulf State Park, a Hilton Hotel. The Gulf Shores High School Navy JROTC presented colors at the start of the ceremony. The infinity pool near the shores of the Gulf of Mexico provides visitors at The Lodge with abundant recreational opportunities. Special lighting illuminates The Lodge at Gulf State Park on a dark night.

Related ItemsJan 16 News
← Previous Story Ono Ladies Club Presents Check To All About Dogs
Next Story → “We are very excited about how we can have this beautiful facility & still protect our environment.”