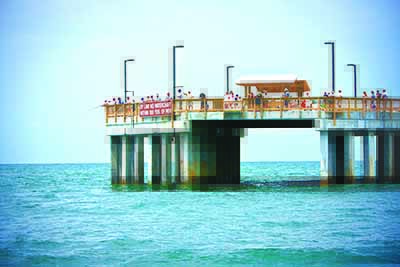 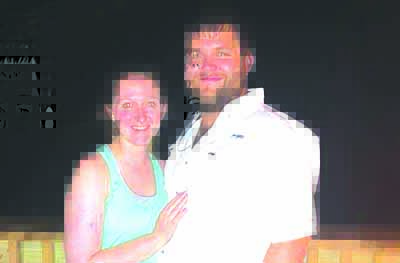 By Fran Thompson
In response to the angling community’s interest, the pilot program for permitted managed shark-fishing at the Gulf State Park Pier will be expanded to include eight dates in July.
Although no legal sized sharks were brought to the pier during the first shark fishing date at the pier on June 19, a six months pregnant Kayci Dixon, with major help from her husband Melvin, can now claim to be the first person to ever bring a shark legally to the pier on the second night, June 26, the state offered anglers the opportunity to fish for sharks.
Melvin Dixon said he also landed the only shark caught on June 19, but it was undersized.
“My wife was the angler and I was her assistant along with a friend, but she gave the reel to me after about five minutes,’’ Melvin Dixon said. “It tooks us about 30 minutes to get it up to the pier and another 10 or 15 minutes to get it on the pier.’’
The spinner shark was 70.5 inches long and weighed 130 lbs.
“It was a team effort,’’ Melvin said. “It takes a team effort to get that much dead weight up on the pier.’’
Shark fishing has not been allowed at Gulf State Park Pier up until this summer.
A transplant from Lucedale, MS, Dixon said he has already put his name in the lottery to try to catch an even bigger shark in July.
The next shark-fishing events will take place on the south end of the pier – called the octagon – from 7 p.m. until 7 a.m. the next morning for the following Sundays and Tuesdays: July 8, 10, 15, 17, 22, 24, 29 and 31. Registration is ongoing and anglers will continue to be selected in the order in which applications are received. To register, visit alapark.com/ shark-fishing.
During the events, the octagon area of the pier will be designated for the exclusive use of participating anglers and their designated assistants. The remainder of the pier will be open to anglers and other pier guests as normal.
The July managed shark-fishing events will allow for 15 anglers per occasion, with no more than one rod and reel per angler in use. Each angler may have one additional assistant, and anglers are encouraged to assist one another while fishing. This allows for a maximum of 30 individuals on the octagon , which will be closed for routine use 30 minutes prior and reopen for routine use 30 minutes following.
Angler gear shall allow for larger reel sizes, but otherwise remain the same as provided for under existing pier rules.
After monitoring the shark-fishing events in July, the agency will evaluate the program and make decisions for upcoming months.
Applicants will need to provide contact information for notification of selection and will be notified a week or more in advance of the date for which they have been selected.
Pictured: Melvin & Kayci Dixon on Gulf State Park Pier; The Octagon at the end of the pier.