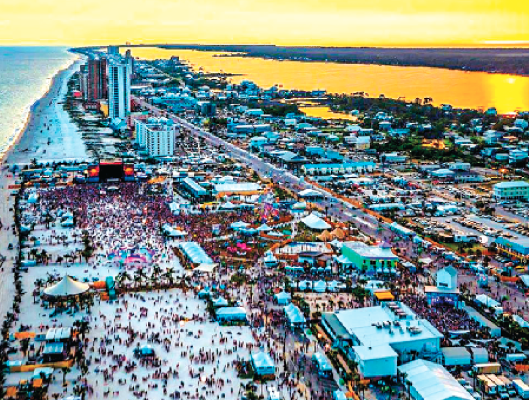 Hangout Fest: May 17-19 at Gulf Shores Public Beach
Celebrating 10 years of beachside fun
By Fran Thompson
Big Gigantic, A Boogie Wit Da Hoodie, Camelphat and SNBRN will all play sets during the tablesetter for the 10th annual event at the Gulf Shores Public Beach. Admission to the May 16 kickoff party is included with VIP tickets and $55 as an add-on.
Scheduled May 17-19, the fest’s headliners include The Lumineers, Kygo, Cardi B, Travis Scott, Diplo, The 1975, Walk The Moon, Jimmy Eat World and Alison Wonderland.
The Red Clay Strays, this year’s local presence, will play at 12:45 p.m. on Sunday on the Alabama Newscenter Sunset Stage.
“First off, I’m so excited for the music lineup,’’ said fest director . Sean O’Connell. “It’s going to be an amazing weekend of music from the very first note.
“I’m very excited that the festival will be broadcasted across the US on Sirius XM,’’ he added.
Cardi B, the Bronx-born rapper, made history this winter as the first solo female rapper to win a Grammy for Best Rap Album in the category’s 20-plus year history. She was nominated for seven awards across major categories, including Album of The Year and Record of the Year. Another Hangout headliner Travis Scott, was nominated for Best Rap Artist.
General admission tickets ($319) and VIP tickets ($1,099) as well as shuttle passes were still available as of May 6. But the VIP experience, which includes pool-side and jacuzzi-side views of the main stage, and complimentary food, beer, wine and cocktails all weekend, were expected to sell out way before the fest starts.
Billed as a music vacation, Hangout Fest organizers try to create immersive musical experiences that is unique on the festival circuit. Patrons can swim in the Gulf, relax in comfort at Hammock Beach, find dog love at the smooch a Pooch Puppy Kissing Booth, or make their love official, at least for the weekend, at the Wedding Chapel.
Organizers will bring back the tremendously popular full-sized Roller Disco roller skating rink again this year.
This year’s Hangout experience will also include:
• Yoga: Morning yoga starts at 11:30 a.m. each day on the Great Lawn. It is free and no mats are required.
• Monster Energy Beach Club: Come jump in the water for a swim or lose yourself to the music performed by an all-star cast of Djins. Grab a free Monster when you visit.
• Sunset Stage on the Great Lawn: The city’s expansive new lawn is at the center of the fest and the perfect place to meet friends while enjoying mostly reggae bands that will rotate on the Sunset Stage all weekend.
• Tropical Spa & Salon: Hydration IVE treatments, salon services and massages available all weekend.
• Psychedelic Bus: A 48-passenger double decker school bus that’s part art and all fun! Grab your camera and come over for one of your soon-to-be favorite picks of the weekend.
• Roller Disco: Rent a pair of skates, hold somebody’s hand and go ‘round and ‘round in circles to tunes from the 70’s, 80’s and 90’s.
Of course, the main attraction is still the music. And if there is one thing that you can be sure of, it is that the Hangout Fest and its music lineup will continue to evolve.
• Malibu Beach House: Featuring an incredible line-up of DJs for a weekend filled with beachside dance parties. When you are ready to cool down indulge in an ice cold Malibu frozen cocktail.

••••••••
Thursday, May 16: Kick-off Party (Tickets $55)
Get the jump start on your Hangout weekend at the Thursday Kickoff Party featuring Big Gigantic, A Boogie Wit Da Hoodie, Camelphat and SNBRN. Gates open at 6 p.m.

General Admission & VIP Tickets Remain
As of May 6, there were still ($319) general admission and ($1099) VIP tickets available. VIP tickets include admission to the Thursday kick-off party.

Shuttle Passes
As of May 6, $50 shuttle passes were still available. But they almost always sell out. The buses run continuously each day from 11 a.m. to 30 minutes after the last act. There are four different park & ride routes, including The Beach Club on Ft. Morgan.