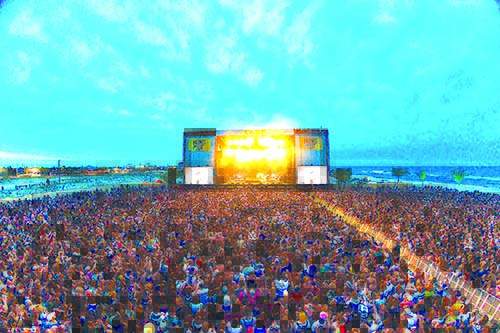 Now in its 9th year, fest is still evolving
By Fran Thompson
One thing about the Hangout Fest that has remained the same is its willingness to embrace change, whether it be the talent that is booked or the design of its footprint.
That was actually imperative this year as director Sean O’Connell, with major input from creative director Lily Zislin, was tasked with creating a vision of how to best use the city’s $10.5 million (and counting) Gulf Place renovation to further enhance his patrons’ Hangout experience.
O’Connell said Zislin is responsible for the fest’s design and esthetic, which he says attendees are going to find exceptional. His forte is traffic flow.
“It’s always a challenge, as these are two different projects with two different goals,’’ O’Connell said. “But we communicate well with the city, and we tried to design using what the city has done.
“We want to keep improving and keep evolving to keep it fresh,’’ he added. “And a lot of what we do is the result of feedback. About one-third of the people who come here respond to our surveys and they give us great feedback.’’
O’Connell said the average Hangout Fest attendee drives 10 hours to get here and stays for five nights.
“This is a vacation. People take a week off from work to come here and its not something that people can do every year,’’ he said.
But they can return home and tell their friends about the experience they had here. And that goes for the bands as well. The Hangout has always placed a premium on providing an elegant backstage experience for the talent, providing artist perks that range from jet ski rides to gourmet food.
“I meet musicians from all over the world who, when they find out who I am, tell me that they hear from other artists that this is the best festival that they play,’’ McConnell said. “Every single band says that. It’s why we put so much effort and love and care into the back stage experience. It’s a big part of it.’’
What have now become Hangout mainstays – Hammock Beach, Camp Hangout, Malibu Beach House, The Ferris Wheel and The Wedding Chapel – will remain, although some will be tweaked. And the amazingly popular Smooch-A-Pooch booth returns in full puppy splendor.
McConnell said the VIP Grove is also now made in the shade with a new design heavy on teepees.
“There is just a lot going on,’’ he said.
This year’s Hangout experience will include:
• Yoga: Morning yoga starts at 11:15 a.m. each day on the Great Lawn. It is free and no mats are required.
• Monster Energy Beach Club: Get a custom haircut and/or dance to DJ’s Ducky, Goldfish and Justin Paul, take a dip in the Gulf and ride a banana boat.
• Not So Secret Piano Bar: Patrons are the talent here. And the more craft cocktails you sip, the better the music will sound.
• Hello Gorgeous: Volume One Salon out of Pensacola will provide salon services such as blowouts, hair straightening, braiding, glitter roots, colored sprays and new styles for the day.
• Sunset Stage on the Great Lawn: The city’s expansive new lawn is at the center of the fest and the perfect place to meet friends while enjoying four reggae bands that will rotate on the Sunset Stage all weekend.
• Tropical Spa: Hydration IV treatments and massages available all weekend.
• Psychedelic Bus: A 48-passenger double decker school bus created by artists Elliot McNally and Johanna Hickey that O’Connell compared to PeeWee Herman vomiting out a window before grabbing a paint roller and painting the bus.
• Roller Disco: This has got to be a first ever. There will be a large beachside roller rink at the fest. Rent a pair of skates, hold somebody’s hand and go ‘round and ‘round in circles to tunes from the 70’s, 80’s and 90’s.
• Sponsor Booths: JBL, Harley Davidson, Bai, Sour Punch & Teva have partnered with the Hangout to offer giveaways, games and festival experiences.
Of course, the main attraction is still the music. And if there is one thing that you can be sure of, it is that the Hangout Fest and its music lineup will continue to evolve.
“I always tell people that nine years after Woodstock nobody would have expected that the world’s most popular music was going to be disco and punk rock,’’ O’Connell said.
“Music never stays the same. It’s always evolving. I have no doubt that this festival will be very different nine years from now.’’

Thursday, May 17: Kick-off Party (Tickets $55)
Get the jump start on your Hangout weekend at the Thursday Kickoff Party featuring Phantogram, T-Pain, K.Faly, and The Knocks (DJ set)

Only General Admission Tickets Remain
As of May 9, there were still ($319) general admission tickets available, The ($1099) VIP, and ($1699) and Super VIP tickets were sold out. The upgraded tickets include admission to the Thursday kick-off party. Elsewise, Thursday tickets are $55 per. Doors open at 6 p.m. on Thur and 11 a.m. Fri, Sat & Sun.

Shuttle Passes Are Sold Out
Fest director Sean O’Connell strongly suggested buying $50 shuttle passes asap during an interview on May 8. Turned out to be good advise. Passes were sold out by that afternoon.

Festival has sold out three times in the past seven years

The inaugural Hangout Music Fest was launched on May 14, 2010, just 24 days after the sickening Deep Horizon drilling rig explosion. It featured performances from Trey Anastasio, The Zac Brown Band, John Legend and Michael Franti. A Sunday afternoon storm forced a temporary fest evacuation, and when the fest re-opened later in the afternoon, it was declared a free event.
The second fest welcomed the Foo Fighters, Paul Simon, The Flaming Lips, Cee-Lo Green, The Black Keys, Widespread Panic, My Morning Jacket and STS9. It came close to selling out and was awarded Festival of the Year honors at the Pollstar Concert Industry Awards.
The 2012 was the first fest sell-out and featured Jack White, Red Hot Chili Peppers, Dave Matthews Band, Skrillex, The String Cheese Incident, The Flaming Lips, Alabama Shakes, Dispatch and Randy Newman.
The 2013 line-up featured Stevie Wonder, Tom Petty, Kings of Leon, Kendrick Lamar, Bassnectar and the Shins.
OutKast, The Black Keys, The Killers, Jack Johnson, Queens of the Stone Age, Pretty Lights, The Avett Brothers, Modest Mouse and The Flaming Lips made the 2014 fest the toughest ticket in its history.
The 2015 lineup featured Foo Fighters, Zac Brown Band, Beck, Skrillex, My Morning Jacket, Foster the People, Paramore, Spoon, Umphrey’s McGee, Major Lazer, TV on the Radio and Phantogram, with Cold War Kids and Vance Joy playing early sets.
The Weeknd and Florence + The Machine headlined in 2016, with Alabama Shakes, Ellie Goulding, Lenny Kravitz, Flume, Haim, Cage The Elephant, Panic! at the Disco, Grimes, The Chainsmokers, Matt and Kim, Leon Bridges and Miike Snow in support.
Last year’s fest featuring Mumford & Sons, Twenty One Pilots, Chance The Rapper and Phoenix also sold out, with Major Lazer, Weezer, DJ Snake, MGMT, Sigur Rós, Marshmello, Migos, Band Of Horses, The Head And The Heart T and Young The Giant in support.
This year’s fest was already close to being sold out on May 9.

Hangout Fest goal: Be the best music fest in the world