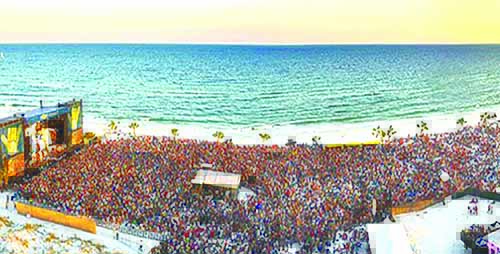 Festival has completely sold out twice in the past six years

The inaugural Hangout Music Fest was launched on May 14, 2010, just 24 days after the sickening Deep Horizon drilling rig explosion. It featured performances from Trey Anastasio, The Zac Brown Band, John Legend and Michael Franti. After an afternoon storm forced a temporary fest evacuation on Sunday, the fest re-opened later in the afternoon as a free event.
The second fest featured the Foo Fighters, Paul Simon, The Flaming Lips, Cee-Lo Green, The Black Keys, Widespread Panic, My Morning Jacket and STS9. It came close to selling out and was awarded Festival of the Year honors at the Pollstar Concert Industry Awards.
The 2012 was the first fest sell-out and featured Jack White, Red Hot Chili Peppers, Dave Matthews Band, Skrillex, The String Cheese Incident, The Flaming Lips again, Alabama Shakes, Dispatch and Randy Newman.
The 2013 line-up featured Stevie Wonder, Tom Petty, Kings of Leon, Kendrick Lamar, Bassnectar and the Shins.
OutKast, The Black Keys, The Killers, Jack Johnson, Queens of the Stone Age, Pretty Lights, The Avett Brothers, Modest Mouse and The Flaming Lips made the 2014 fest the toughest ticket in the history of the fest.
The Weeknd, Florence & The Machine, Alabama Shakes, Lenny Kravitz and Panic at The Disco had the later time slots last year, and Foo Fighers, Zac Brown, Beck, Skrillex, My Morning Jacket, Foster The People, Paramore, Spoon & Umphrey’s McGee were top acts in 2015.

It’s time for Auburn to conduct another economic impact study

An economic impact study conducted by the City of Gulf Shores and Auburn University determined that the 2013 Hangout Festival brought a whopping $31 million to the local economies of Gulf Shores and its surrounding areas in 2013. It’s also a safe bet that the economic impact has been significantly higher since then as the capacity limit set by the City of Gulf Shores has increased 5,000 to 40,000 total since then. Not included in that number is the dollar value of the national exposure from all the news, interviews and live streaming performances going out every year to a national audience. That exposure of our beautiful beaches adds significant jet fuel to our economic engine. There are lots of festival experience options out there for music lovers, and the Hangout experience is not cheap. As rapper McLemore put it: “I didn’t know that Alabama could look like this. I went out to check out the hammocks and fell asleep for two hours.’’

According to a news item in Variety, LiveXLive will produce both the festival audience’s video experience in addition to the global live broadcast to connected devices. The executive team includes former leaders of Mandalay Digital Group, Warner Bros, EMI, Virgin Records, Atlantic Records, and Live Nation.
LiveXLive will create a vivid, 4K viewing experience comparable to having a front row ticket and all-access pass. Programming will include premium quality live performance streams, DJ sets, artist interviews, and behind-the-scenes exclusives.
The live streams and original content are available globally on all connected screens via LiveXLive and its affiliate partner platforms.
“Hangout Music Festival is a favorite of fans and artists alike, for its unparalleled beach setting and its eclectic lineups which lead to spectacular, one of a kind performances,” said Rob Ellin, CEO and Chairman of LiveXLive.
Since launching in May 2015, LiveXLive has broadcasted performances from artists such as Katy Perry, Rihanna, Metallica, Maroon 5, Sam Smith, Elton John, Rod Stewart, One Republic, Bruce Springsteen, Fergie and John Legend.

South Baldwin based Jimmy Lumpkin, who had a steady weekly residency at LuLu’s, is as close as the Hangout Fest has to a local act. Jimmy & his band, The Revival, which recently added guitarist Duane Betts (son of Dickie), will open the fest on Friday at 12:15 a.m.
Duane Betts has played alongside Jack Johnson, G. Love, Kid Rock and Phil Lesh. He has lent his guitar talent to Dawes, platinum rockers Puddle of Mudd, making headlines with California bad boys White Starr and touring the world with Dickey Betts & Great Southern prior to joining forces with Jimmy.

As of May 9, there were still ($309) general admission, ($1099) VIP tickets, and Super VIP ($1599) tickets available at hangoutmusicfest.com. The upgraded tickets include admission to the Thursday kick-off party. Elsewise, Thursday tickets are $50 per.

There will be three different beach access points between The Hangout Stage & The Surf Stage and a new & improved obstacle course to test your sobriety on. Popular stops like The Puppy Kissing Booth, The Chill Zone and The Wedding Chapel remain. Camp Hangout, a beachside playground located between Malibu Beach House and Hammock Beach is also back. Play tug-of-war, blast through a slip-N-slide, launch water balloons, get your face painted and expect other classic camp adventures. The idea: “Play like a kid…Hangout like a grown up.’’

Shuttle Option Is No Mas

At $50 for the weekend and a chance to get a VIP upgrade (believe us, it does happen), shuttle passes are right up there with bicycles as a way to get back and forth to your billet. Unfortunately, the shuttle tickets are already sold out