Hangout is now part of Gulf Shores’ brand; An upscale spring break given its place at family vacation destination 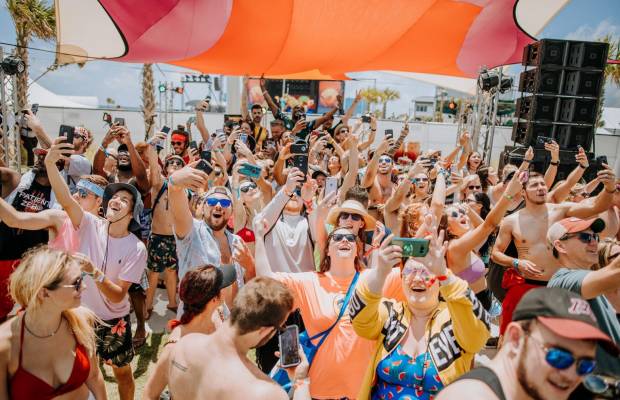 By Fran Thompson
During a Coastal Alabama Chamber breakfast his company sponsored at Lucy Buffett’s Lulu’s, Hangout Fest founder Shaul Zislin said it made him “feel warm and fuzzy’’ that the fest entered a contract with Circle K to display promotional posters at hundreds of its convenience stores around the Southeast.
At an earlier community meeting he sponsored (free craft beer & munchies) at Big Beach Brewing Co., Zislin said that the festival promotes Gulf Shores and its beautiful beaches in ways that are beyond Gulf Shores Tourism’s capacity.
He specifically mentioned a national promotional partnership with Monster Energy Drink offering Hangout Fest vacations as prizes.
He said rock stars talk about the beaches here as they travel the world performing. He said people come to the fest for the first time and then come back ready to buy a $2 million condo here (possibly at Gulf Place, the 12 unit condo with 10,000 ft. of first floor retail space he is building at the main entrance to Gulf Shores Public Beach).
Many Americans did not even know Alabama touched the Gulf of Mexico until the BP Oil Spill put Pleasure Island in the national conversation.
That terrible explosion on the Deepwater Horizon oil rig, an accident that cost 11 men their lives, occurred on April 20, 2010, three weeks before the first Hangout Fest.
That tragedy itself and, more importantly, the multi-million dollar advertising campaign paid for by BP raised Gulf Shores’ profile as a beach vacation destination.
The ESPN televised NCAA National Beach Volleyball Championship has also contributed to spreading the word about our spectacular beaches.
The Hangout Fest was promoted and pitched to the city as a family event.
A very cool children’s village filled the entire Hangout Restaurant courtyard and included an area stocked with musical instruments for kids to play with.
The concept Zislin presented back then was that families could spend a week in Gulf Shores and enjoy fishing, our zoo, boating, parasailing and other family activities while also spending time at the fest.
By the second year, children could barely find a spot in the Children’s Village among the adults while Michael Franti played an acoustic set especially for the kids. I believe the children’s village was shuttered altogether in 2013.
The festival as it exists now is a very upscale spring break celebration. And it includes an increasing number of young tourists who come to party and don’t even go to the fest.
Pleasure Island’s award winning Convention & Visitors Bureau has always focused on attracting families with blessings from Gulf Shores and Orange Beach. The cities have both taken major steps to discourage rowdy spring break type behavior.
In an effort to get ahead of rowdy behavior from millennials here for spring break, Gulf Shores instituted a seasonal alcohol ban in 2017. This year it was from March 2 through April 17.
The restrictions were spurred by similar ordinances passed in Panama City a year earlier that drove more spring break crowds to Pleasure Island. The new rules were implemented to prevent the island from becoming an out-of-control Panama City.
Greg Kennedy, a former Gulf Shores City Councilman, made a valid point when he said at a public forum that it was ironic that Gulf Shores takes a draconian stance during spring break with college kids while welcoming 40,000 Hangout patrons with open arms.
“Just how damn hypocritical it is for the city to say you can’t drink a beer on your private property during spring break but then they allow that?” Kennedy asked. “That’s the big elephant in the room nobody wants to talk about.”
“It goes hand in hand with what happened at Spring Break and that was associated with it.’’ said Orange Beach Mayor Tony Kennon (see page 8 story). “It generated a certain amount of dollars. But a majority of Orange Beach residents wanted nothing to do with it. And that’s what this (Hangout Fest) is – A late term Spring Break. It is not the kind of dollars we want to generate.’’
The tax and franchise fee revenue the city collects from the Hangout Fest supports the incredible amenities Gulf Shores citizens enjoy. But those dollars don’t come without complications.
“Our phones were ringing from citizens about noise and traffic which was overwhelming at times,” Gulf Shores Mayor Robert Craft said after the 2019 festival. “Our challenge is to try to explain all the things that we’re doing and the money that we collect. It balances out. This is what you give up, this is what you get.”