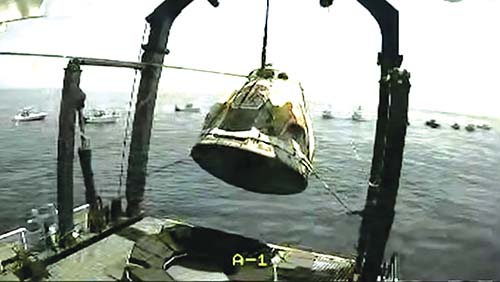 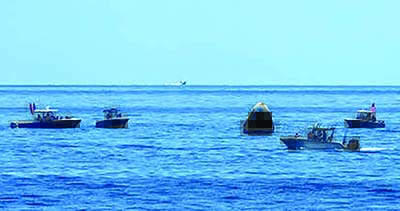 Already well known as the Cradle of Naval Aviation, Pensacola is now also part of space history, as two astronauts, after spending 64 days in space, splashed into the Gulf of Mexico 37 miles south of Perdido Pass around 2 p.m. on Aug. 2.
The men, inside the SpaceX Dragon capsule dubbed Endeavour, landed off of Pensacola instead of the east coast of Florida due to issues associated with Tropical Storm Isaias. Pensacola was one of seven splashdown options in Florida for the capsule. And the waves and wind were calm near Pensacola.
The Endeavour is the first commercially built and operated space capsule to carry humans into orbit and back. It was also the first water landing by NASA since 1975 and the first splashdown ever in the Gulf of Mexico.
People hoping to catch a glimpse of the historic event were on beaches from Perdido Key to Pensacola Beach. The splashdown was broadcast live on the NASA website and a capsule related sonic boom was heard in the area.
“We couldn’t see anything, but we heard others at Perdido Pass could faintly see the parachutes with binoculars,’’ said Cathy Deal of Innerarity Point, who tried to view the landing at Big Lagoon State Park after traffic snarls prevented her from getting to Johnson Beach. “We heard the double booms though, and it was still exciting,’’ she said.
It took around 50 minutes for the capsule to enter the atmosphere 250 miles above Australia before it parachuted into the warm Gulf.
Test pilots Doug Hurley and Bob Behnken launched from the Kennedy Space Center on May 30 as a test flight for NASA’s Commercial Crew program to deliver astronauts to the International Space Station.
GO Navigator, a 170-foot ship modified with a helicopter landing pad and a large recovery crane, docked at NAS Pensacola in advance of the recovery.
At least a dozen private vessels gathered near the landing site, as SpaceX boats surrounded the capsule and The Coast Guard warned the private boats to move away from the Endeavour.
“Of course, we wanted to make sure that there was a clearing for them to land and the Coast Guard did an excellent job of ensuring that, and then of course after they landed the boats just came in,’’ NASA Administrator Jim Bridenstine said at a news conferrence following the landing. “We need to do a better job next time for sure. It’s a big area to have to clear, and to clear all of it is probably going to require more resources. That was not what we were anticipating. That capsule was in the water for a good period of time, and the boats just made a B-line for it.’’
It took about an hour to purge the Endeavour of toxic gases and bring the pilots onboard Go Navigator for a medical checkup. The men were living in near weightlessness for more than two months.
The astronauts boarded the helicopter on GO Navigator for a flight to NAS Pensacola. They then boarded a NASA jet that flew them back to their home base at Johnson Space Center in Houston and a reunion with their families.
After successfully completing the first flight ferrying people from orbit, NASA and SpaceX are preparing two more missions carrying four astronauts each for a six-month stay at the International Space Station.
“This is the next era in human spaceflight where NASA gets to be the customer,” said Bridenstine.
“It was an enormous relief after months of anxiety making sure we could bring Bob and Doug back home safely,” said Gwynne Shotwell, president of SpaceX.
The spacecraft went from a screaming orbital speed of 17,500 mph to 350 mph during atmospheric re-entry, and finally to 15 mph at splashdown. The capsule’s outside temperature during the descent peaked at 3,500 degrees Fahrenheit and the anticipated top G forces felt by the crew were four to five times the force of Earth’s gravity, according to data in Florida Today.
Within a half-hour of splashdown, the 15-foot capsule was on board its recovery ship. The opening of the hatch was held up by extra checks for toxic rocket fumes.
“Welcome back to planet Earth and thanks for flying SpaceX,” said Mission Control from SpaceX headquarters.
The last time NASA astronauts returned from space to water was on July 24, 1975, in the Pacific, the scene of most splashdowns. That splashdown ended a joint U.S.-Soviet mission known as Apollo-Soyuz. The Mercury and Gemini crews in the early to mid-1960s parachuted into the Atlantic, while most of the later Apollo capsules hit the Pacific. Hurley came full circle, serving as pilot of NASA’s last space shuttle flight in 2011 before taking command of this SpaceX flight.
“Great to have NASA Astronauts return to Earth after very successful two month mission. Thank you to all!” President Trump tweeted.
SpaceX already had experience hauling cargo to the space station, bringing those capsules back to a Pacific splashdown.
“This is the next era in human spaceflight where NASA gets to be the customer,” Bridenstine said.
The next two SpaceX missions will involve sending four astronauts on each flight for six month stints aboard the space station beginning next month.Tourist flights on the Endeavour are a possibility sometime next year.
Pictured: Support teams and curious recreational boaters arrive at the Endeavour spacecraft shortly after it landed with NASA astronauts Robert Behnken and Douglas Hurley onboard in the Gulf of Mexico off the coast of Pensacola on Aug. 2; The SpaceX-built Dragon capsule is hoisted aboard a ship 30 miles south of Perdido Pass.