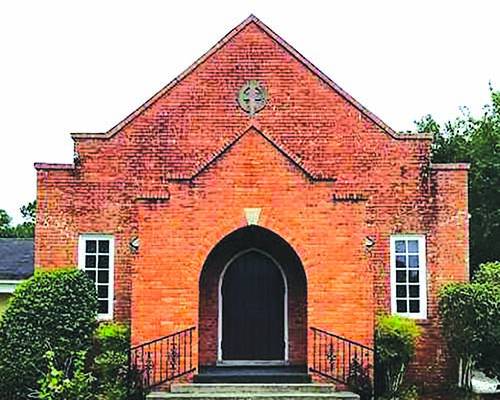 Historic St. Peter’s Episcopal Church in Bon Secour will host its next monthly fishfry on August 5 from 5-7 p.m. A hugely popular monthly community event, the fish fries will also be held on the beautiful St. Peter’s campus on Sept. 2.
Fried fish plates are available for dine-in or take-out and include sides of hushpuppies, baked beans, coleslaw, potato salad and dessert. The cost is $10. St. Peter’s is located on the corner of County Rd.10 & County Rd. 49 at 6270 County Road 10 in Bon Secour.
Pictured: St. Peter’s church began in 1878 when three women in the community organized the congregation. They were Mrs. Theresa Margaret Miller, Mrs. Mary Ann Witt and Mrs. Dena Billie. The congregation first met in the homes of the members of the church who lived on both sides of Bon Secour River.
In 1885, a frame church was built. Clergy came to the church from Mobile by sail boat to conduct services. Local laymen were licensed so that services could be held when clergy were not available.
The boats that brought the clergy had no set schedule so a signal system was devised. If a priest arrived by day , a flag was flown from a staff in the church yard and if by night a lantern was hung from the belfry. Church members came to services by “pulling” a skiff or by walking across the marsh on planks. For 33 years a school operated by the church met the educational needs of the community. Then in 1928 the church burned to the ground. The present brick church was constructed in 1931. The Parish Hall was added in 1962, the rectory in 1967. St. Peter’s church became a Parish at the Annual Convention of the Diocese of the Central Gulf Coast in 1982. Ten years later in 1992, the church called its first full-time priest