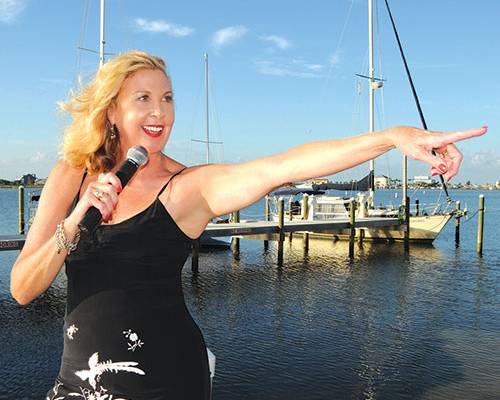 By Fran Thompson
Holly Shelton was born to entertain, and, as anybody who has seen her on stage can attest, she’s very good at it.
The daughter of musicians, Holly was groomed as a performer from an early age. Even as a child exposed to art, opera, musical theatre, blues and dance in Memphis, she knew she wanted to follow the spotlight.
“Holly’s something over six feet tall, and there isn’t a stage built that will contain her” is how Bill Campbell of the Northwest Florida Daily News aptly put it.
Best known on Pleasure Island for her many years of work with pianist David Shelander at the Perdido Beach Resort, Holly has played club and cabaret venues across the country and has toured Morocco and the Mediterranean with her colorful and versatile show.
But when Shelander died suddenly of a heart attack in September of 2013, a little bit of Shelton died with him. That happens when you lose somebody you shared a stage with for countless gigs for close to 30 years.
“David was a musical genius, and he had the resume to back it up,’’ Holly said. “We were together for so many years that in a lot of ways we were closer than family, and we brought out the best in each other. It was all so sudden.’’
Shelander played with Doc Severinsen and the Tonight Show Orchestra and recorded with the likes of Eric Clapton, Jeff Beck, Rick Derringer, Stevie Ray Vaughn, Dickie Betts and Leo Nocentelli of the Meters. He produced national commercials and worked on records for the Gap Band, Air Supply and the Captain & Tennille. He wrote the treatment for The Last Ship (based on a book by his stepfather), which is now one of the most popular shows on TNT.
“He would’ve been set financially for the rest of his life just from The Last Ship,’’ Holly said. “We had just played the past four nights together at Ruth’s Chris Steakhouse in Destin when he died. It was just so sudden.’’
The loss of her dear friend and musical partner, as well as the death of her father and some medical issues of her own around that same time gave Holly pause.
Being on stage in front of an audience was no longer what made her day.
Always a veteran’s advocate (she founded the Pearl Harbor Initiative, a non-profit to raise funds to transport remaining area veteran survivors back for the 70th anniversary of the attack), Holly devoted more time to veteran affairs in honor of her father. She went back to college, earning a masters degree in mental health counseling at UWF. She was at the very least semi-retired from the music business.
But when she heard from another musician that Flora-Bama co-owner Joe Gilchrist was opening the New Malibu Lounge on Old Gulf Beach Hwy, and that Joe wanted to emphasize (surprise, surprise) nightly music as a draw, she decided to call her old friend and talk. The result is a Wednesday evening residency from 7-10 p.m. at The New Malibu Lounge (1000 Gulf Beach Hwy. in P-cola).
“David and I would often stop in at the Flora-Bama after work, and I’d jam with people there. Plus, Joe and I had hooked up on some veteran’s projects. He’s always been such a huge advocate for the military,’’ Holly said. “I decided it was time to come out of my cave and try to work again. So, I called Joe, and he has been fantastic. He gave me everything I asked for. He told me he just wanted me to be me.’’
The Holly Shelton Band includes John Link on piano and saxophone, Jim Armstrong on guitar and Jody Finx on percussion. That is in addition to guest artists that show up on most Wednesdays.
“It’s been going on for about four months,’’ Holly said. “There are good nights and bad nights as far as crowds. But it is building and we are seeing people coming back. I definitely have a good band, and we do different stuff depending on who’s there and what we are in the mood for.
Also an actor during her eclectic career, Holly spent 10 years in Los Angeles appearing in films that included Clint Eastwood’s “Heartbreak Ridge.” Her favorite L.A. memories are working with Eastwood, Les McCann, and Eddie Harris and entertaining for Dr. Ruth, Claude Bolling and Morgan Freeman. All five of her well reviewed CDs are available on her website (Hollyshelton.com).
She is happy now to be back on stage helping Gilchrist make The Malibu as integral to West Pensacola community as The Flora-Bama has always been to Perdido Key.
“This is giving me a chance to have a last act,’’ she said.