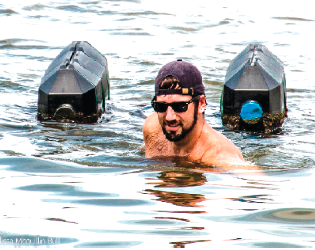 Bell-E’s Bacon. Books. Craft Beer. Music. Navy Cove Oysters. Football on TV. What is not to like about a book signing by Chef Irv Miller of Jackson’s in Pensacola on Saturday, September 14 beginning at 4 p.m. at Page & Pallette Book Store in downtown Fairhope.
It’s been said Gulf Coast oysters have the cleanest taste of any oyster, that they taste of the sea and not much else, and for that reason they should be the oysters against which all others should be measured.”
Gulf Coast Oysters: Classic & Modern Recipes for a Southern Renaissance is the latest cookbook from Miller. Beautifully photographed and replete with mouth-watering recipes, th book is a joyful and thorough exploration of Gulf oyster culture while also putting a fresh, modern spin on preparing “panhandle pearls.”
Gulf Coast Oysters also focuses on preserving the Gulf’s cross-cultural, Southern traditions and a goal of creating new interest in seafood-sustainable products. Miller’s years of hands-on experience of modernizing the way the Florida Panhandle thinks about food, as well as his support of sustainable food-producing practices, has provided him a unique perspective for telling the story of the ever-changing food scene along the Gulf Coast.
Also served at the event will be Navy Cove Oysters, a company founded in 2011 out of a long-term friendship and working relationship between marine science researchers Dr. John Supan and Dr. Charles Wilson.
Eric Bradley, raised on a crawfish farm in south Louisiana, joined the partnership in 2016. The partners sought to join a growing movement along the coastal regions of the Southern US and Gulf of Mexico to produce boutique, prized oysters for the half-shell market.
The Navy Cove Oyster Farm is located along the northern shore of Fort Morgan near its namesake body of water, which was frequented by Indians, an anchorage for pirates, and then the U.S. Navy during the War of 1812 and WWII.
The site rests at the intersection of the productive waters of Mobile Bay and the salty waters of the Gulf of Mexico. So, Navy Cove Oysters are constantly bathed by tidal exchanges between the gulf and bay. Its oysters are characterized by an umami of moderate brine, a rich, creamy, buttery texture and sweet, cucumber-like finish. Our oysters carry the signature of a prominent “racing stripe” across the shell surface. They are easy to shuck with a bill or hinge oyster knife.
The company targets the production of a medium-size oyster of moderate salinity. But smaller and larger sizes and higher or lower salt content are available. Oysters can be ordered through Bon Secour Fisheries in Bon Secour. Info: Navycoveoysters.com.
Also served at the book signing will be a special batch of beer Ghost Train Brewing of Birmingham. Music from Fairhope’s own Blue Mullet Bluegrass Band starts at 6 p.m.
Pictured: Navy Cover Oyster co-owner Eric Bradley working the farm on Mobile Bay.