Jimmy Buffett & Kenny Chesney both play The Wharf in Ap 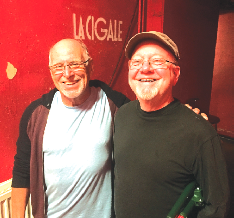 At least according to Beachfront Radio.com, Jimmy Buffett’s “Margaritaville” and Kenny Chesney’s “No Shirt, No Shoes, No Problem” are two of the top 10 trop rock songs of all time. (That same top 10 list includes a tune, “Beach In My Backyard,” written by Gulf Shores’ own Brent Burns).
While Buffett is credited (along with Jerry Jeff Walker) of inventing the genre that incorporates elements of rock, reggae, country, caribbean, calypso and zydeco, sometimes in the same song, Chesney has carried the trop rock torch with aplomb during a career that has included more than 40 Top 10 singles and numerous Academy of Country Music awards.
Buffett, a Gulf Coast native, brings his Son of a Son of a Sailor Tour Home to the Wharf Amphitheater on April 23, and Chesney follows with his Songs For The Saints tour to the same Orange Beach venue on April 27. Both concerts are sold out, but tickets are available on the usual secondary markets and quite often at cost from fans with extras before the show.
Both legends are familiar with the Gulf Coast, having played multiple times at The Wharf as well as beach concerts in Gulf Shores (Buffett) and the Flora-Bama (Chesney) that attracted more than 50,000 fans.
Buffett has also played shows at his sister LuLu’s restaurant in Gulf Shores, and Flora-Bama owner John McInnis is a friend and president of Chesney’s Love for Love City Foundation, an organization that was set up in the aftermath of Hurricane Irma to help get aid to the Virgin Islands.
Pictured: Brent Burns, a nationally recognized trop rocker himself, poses with Jimmy Buffett before Buffett’s yearly run of shows (a Parrothead mecca) at La Cigale, a historic 1,000 seat venue in Paris.