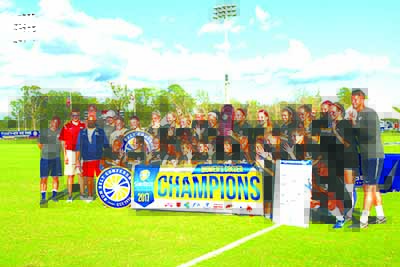 An anticipated 5,000 soccer players will play games in November at the Foley Sportsplex during five soccer tournaments, including the just completed Sun Belt Conference Women’s Soccer Championship. The NJCAA Division I Women’s Soccer Championship will run from November 11 – 17. The Championship game will be held on November 17 under the lights at 6 p.m. Pool play will determine the top four teams in the 12 team tourney. While the NJCAA is no stranger to Foley, having just been in town in May for the Division II Men’s Golf Championships, this is the first time the women’s soccer championship will be held at FST. Foley will again welcome collegiate club soccer teams from around the nation at the end of the month for the NIRSA National Soccer Championships November 29 – December 1. It’s the second time NIRSA, Leaders in Collegiate Recreation, has chosen Foley for their university-sport club soccer championships, previously held in 2016. The tournament is made up of 96 teams, 48 men’s and 48 women’s, who qualified through a regional tournament or a lottery. Some of the teams already qualified include Colorado State, Minnesota, and Iowa State. In addition to three collegiate championships in one month, FST is hosting two youth soccer tournaments in November. The Alabama Soccer Association’s (ASA) State Cup was played November 2 -4, with 100 boys’ and girls’ youth teams from around Alabama. Youth club teams will also take to the fields November 16 -18 for the Coastal Academy Cup. This tournament will feature teams from around the U.S. and has grown from 95 teams in 2017 to an anticipated 150 teams this year. Coastal Academy Cup currently has a waiting list for teams still trying to register in certain age divisions.
“It’s our goal to not just be a soccer destination but the soccer destination,” said Foley Director of Recreation and Sports Tourism, David Thompson. For more info, visit FoleySportsTourism.com.