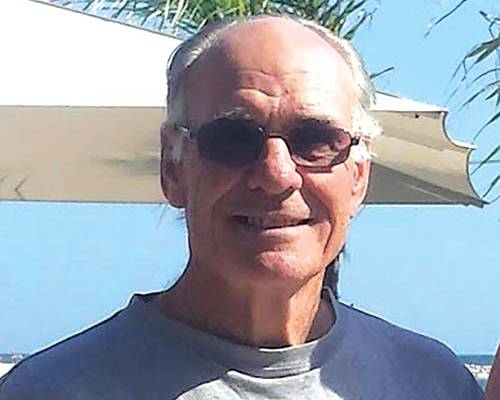 Ken Krempin is 1-man support crew for Mull Brothers bicycle trek from Gulf of Mexico to Lake Erie
“I want to find the craft beer in each of these different towns’’
By Fran Thompson
Andy and Chris Mull realize that support man Ken Krempin (pictured) is the crucial cog in their 1500 mile bicycle trip from the Flora-Bama Beach to the shores of Lake Erie.
Having recovered from prostate cancer himself, he also brings inspiration from the perspective of a man who is well aware of the importance of testing.
“The doctor says I am going to die of something, but he doesn’t know what it is,’’ Ken said.
“We would not be able to do this without him. I just don’t think we could do it on our own,’’ Chris Mull said.
Ken will set up and break down the group’s base camp, find accommodations at the next stop and help with emergencies and logistics throughout the 25 day adventure.
He has implemented large scale software systems for the State of Maryland Mass Transit System and Navy bases in Yokosuka, Japan, Pearl Harbor and Guam.
He has also been president of the Perdido Bay Villas Homeowners Assn. for the past three years. So getting the Mull boys home for their grandmother’s 100th birthday party on August 30 should be a piece of cake.
He is also not worried about the physical strain of keeping up with the two brothers.
“He acts like he’s 50, but he’s 76 years old,’’ Chris said. “He’s more excited maybe more than we are. He knows we are going to have a good time.’’
Ken met Chris Mull at the Perdido Key Golf Club’s Legends Bar and they became fast friends. When he found out about the trip, maybe during a Thirsty Thursday gathering at Legends, Ken was immediately all-in.
“Chris and I are both from Ohio and we hit it off. We are good friends. There is a lot of commonality with us,’’ he said.
Born in Canada, Ken grew up in LA and attended college in Iowa. He met his late wife Mary while at another college in Ohio (Toledo Mudhens). He retired in Maryland in 2012 while handling consulting jobs for that state and Honeywell Corp.
This is not Ken’s first flirtation with RV living. He stayed for four months in a 45 ft. Winnebago at a Perdido Key RV Park in 2014 to be with his family here after he lost Mary, his wife of 48 years
After a quick breakfast early each morning, the Mulls will start peddling.
Ken will spend about a couple hours breaking down camp and then drive 60 miles and start looking for a place to spend the night.
“They’ll have to peddle for six or seven hours. I am just the SAG,’’ he said. “I’ll drive for an hour, set up camp and get a cold beer and start a party.’’
Ken said he expects the Mulls to cool down in the shade, replenish their fluids and stretch when they arrive at camp. The three men will then find a local hot spot for dinner.
“We have a main route that we are following, but when I pick up the camper, I’ll drive around 60 miles and scope out what is there,’’ Ken said.
With his logistics background, Ken said he is looking forward to that part of the trip, especially since the three men are a simple gps equipped cell phone away from each other in case of a mishap along the way. “They can just turn on their cell phones and find out where I am,’’ he said.
“I am just looking forward to the overall adventure and the little bit of challenge of finding small towns and looking around to find where we can relax. I’ll search for a good place to eat and just enjoy the environment I am in,’’ Ken said.
“And I want to find the craft beer in each of these different towns,’’ he added.
The Krempins first found and loved the Perdido Key area when their daughter’s husband was stationed at NAS.
“It was a nice area to come down to from the frozen north,’’ Ken said.
Well traveled, Ken has been in every state except Alaska, and he considered hitting the road in his Winnebago after Mary passed. But he’s been living in Perdido permanently since 2014. And he has no plans to ever move away.
Mary’s family is still in Woodville. Ken is looking forward to visiting with them while the Mulls are at their grandmother’s celebration about 90 minutes away.
“I look at this as another blessing at my age to be able to do the labor that will be involved and continue to be very active,’’ Ken said. “Just to be able to take this trip with those two guys is a real blessing. I’ve learned that living is about being thankful and enjoying life. And that’s what I am going to do.’’

Related ItemsJuly 29 News
← Previous Story Masks will be required; Most parents choose classroom option
Next Story → Mull Brothers to bicycle from Flora-Bama Beach to shores of Lake Erie on behalf of Simon Says