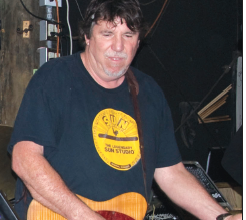 The Krewe of the Royal Riff Raff will parade in the neighborhood surrounding Pirates Cove in Josephine on Sunday, Feb. 23. The parade, officially the Royal Disorder of Riff-Raff Mardi-Gras Parade, will muster at 2 p.m. The Royal Disorder of Riff-Raff Mardi-Gras Ball, featuring live music from (pictured) Johnny Barbato & The Lucky Doggs, will start after the parade (around 3:30 p.m.) Pirates Cove is located at the south end of County Rd. 95 on Arnica Bay. County Rd. 95 is accessible from either County Rd. 20 or Hwy. 98. Although it is straight across the bay from Bear Point in Orange Beach, the rule of thumb when traveling to this unique corner of the earth for the first time is that when you think you are lost, you are actually almost there.