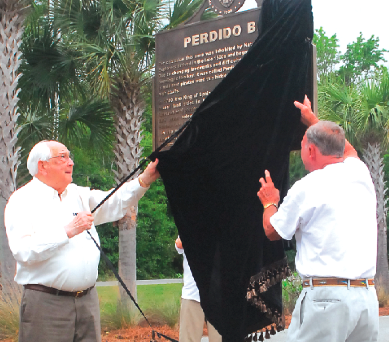 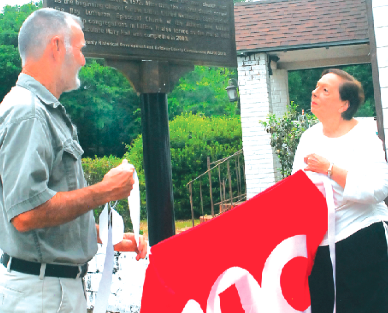 Lillian Bicentennial Committee unveils historic markers
Lillian Boat Launch and St. Joseph Catholic Church are recognized as significant sites
By Sally McKinney
The first historic markers in Lillian, Alabama were unveiled recently. The Lillian Bicentennial Committee had been working on the project for 18 months and everything came together in three locations in May.
The first marker is located at the Lillian Boat launch and gives information about the history of Perdido Bay and the Lillian Bridge.
Perdido Bay was popular with Spanish Explorers in the late 1500s. Because of the changing landmarks and difficulty for ship captains to find the opening to the bay, it was called “Perdido”, the Spanish word for “lost.” In 1780 the King of Spain gave land grants, the oldest land titles in Baldwin County, to the Suarez family. Descendants of the early settlers are still living in Lillian.
Prior to the construction of first Lillian bridge in 1916, only a ferry was available to cross the bay from Alabama to Florida. This bridge was replaced in 1943 and the current bridge was dedicated in 1980.
The second marker gives information about the community of Lillian and St. Joseph Catholic Church. This marker is located on Santa Piedro Street and US Highway 98, in from of the early church.
The community on the west coast of Perdido Bay was named Lillian when the first post office was opened. It was named in honor of the daughter of the first postmaster, William Thomas Kee.
In 1923 the Baldwin Colonization Company purchased 55,000 acres, including Lillian, to promote as a resort location. The popularity of the area spread throughout the country and Europe, bringing many nationalities to the area.
The heart of historic Lillian was on Barclay Avenue, including a one-room schoolhouse, the post office, hotel and several homes. The post office was later moved to 6th Street where it now serves as a bakery.
The Bicentennial program was completed at the Lillian Community Club where Price Legg, Chairman of the Lillian Bicentennial Committee spoke of the history of Lillian and introduced several members of families who can trace their heritage to the early days of the community.
Lillian organizations are planning special events throughout the year to commemorate the 200th anniversary of Alabama statehood. The year’s celebrations will culminate on Saturday, Dec. 14, the actual date of statehood, when the Optimist Club of Perdido Bay hosts the annual Christmas Parade. Many of the entrants in the parade will have a Bicentennial theme.
Pictured: Former Congressman Jack Edwards and Harry Suarez unveil the Historical Marker located at the Lillian Boat Launch. Rep. Edwards was the Congressional Representative in 1980 when the current Lillian Bridge was dedicated. Harry Suarez is a descendant of the Suarez family who received the Land Grant from the King of Spain in 1780; Descendants of the early settlers of Lillian, Jerry Kee and Betty Schnatz Morris, unveiled the new Historical Marker in front of St. Joseph Catholic Chapel, the first church in Lillian. (Ken Stewart photos).