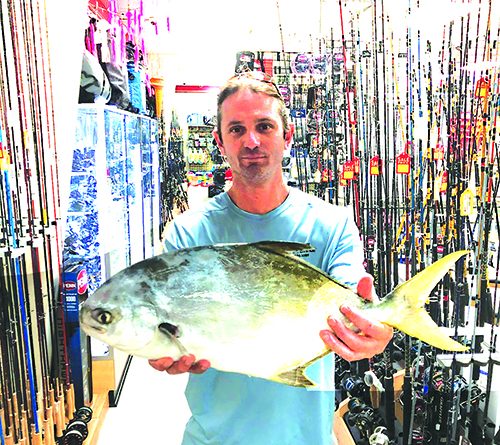 By David Thornton
Pompano anglers have a great opportunity to contribute to the future of this fishery by participating in the Pompano Brood Stock Collection for the Alabama Marine Resources Division Claude Peteet Mariculture Center, at two beach locations. One site is the gravel parking lot (“Shell Beach”) east of Perdido Pass bridge, and the other is at Mobile Street on the Fort Morgan Peninsula. Look for AMRD officials there from 7 a.m. to noon on Tuesday through Thursday. This program has already reared and released hundreds of thousands of juvenile pompano into our coastal waters.
As an incentive for participating, every fish turned in earns a raffle ticket for prizes.
As extra incentive this year, the Alabama Pomp Stomp Fishing tournament based out of Sam’s in Orange Beach (in conjunction with CCA Alabama and Aftco Tackle) is offering a raffle prize ticket for every live pompano donated to ALMRD.
Pictured: Jason Mote of Foley with the 6 lb.,14.6 oz pompano he caught from the beaches of Baldwin last April. Even though his pompano weighed more than the existing record by 1.6 ounces, according to the rules it can only be considered a tie, not a replacement for the existing Alabama record for Florida Pompano is 6 pounds 13 ounces caught by Patricia Cluck from the Gulf State Park Pier on April 28, 2010.