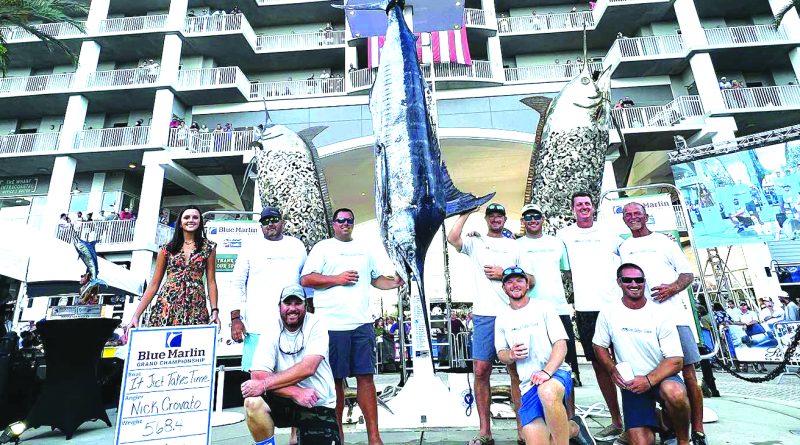 Locals Dominate Blue Marlin Grand Championships
Nick Crovato and Orange Beach based It Just Takes Time won the recent Blue Marlin Grand Championship at The Wharf with a 568 pound blue marlin that was 11 pounds heavier than 2nd place A Work of Art, another Orange Beach based boat. The runner-up points also earned the Gulf Coast Triple Crown Championship, a multi-tourney point series that includes the Orange Beach Billfish Classic, the Mississippi Gulf Coast Billfish Classic in Biloxi, the Emerald Coast Blue Marlin Classic in Sandestin and the Blue Marlin Grand Championship. The purpose of the series is to bring positive recognition and exposure to the outstanding Big Game fishing in the Northern Gulf of Mexico. Director Jim Cox said his team is already planning for next year’s tourney (July 12-16, 2023) at The Wharf. Part of the festivities will include a monster truck jump across the tourney weigh station. Pictured: (Above) Nick Crovato and the It Just Takes Time crew with the winning 568 lb. blue marlin; (below) Troy Layton with a 40.6 lb. wahoo caught on the Sea Wolff; Chad Sanders with a 49.2 lb. tuna caught on the Sunrise; Lance Glaser with Work of Art’s 557.4 blue marlin; First female angler Amanda Bond from Up To It with the first qualifying wahoo, a 22.2 pounder.