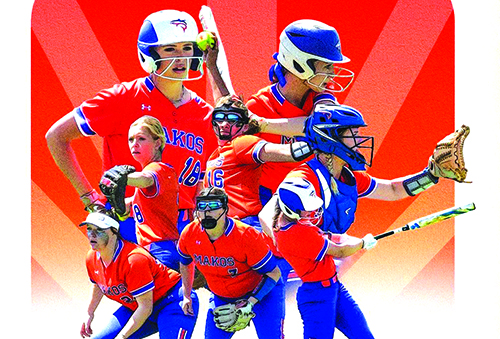 Freshman Daigle Wilson hit a walk-off single to left field for Orange Beach High School in the bottom of the seventh inning to give the Makos a 2-1 victory over Mars Hill and the Alabama Class 2A softball title in Oxford on May 21. The Orange Beach community welcomed the team home with a reception in the Performing Arts Center the following afternoon.
Wilson’s single scored Falyn Beebe from third base, earning the Makos (31-9) a second straight AHSAA Class 2A softball championship at Oxford’s Choccolocco Park. In last year’s title game, catcher Ava Hodo ended the state finals with a championship-winning home run.
The Makos managed only three hits against Mars Hill pitcher Riley Vaughn, but they parlayed a seventh-inning walk, a heads-up base-running play by Beebe and Wilson’s hit into a championship win.
Orange Beach has competed in championship play just two seasons and has two AHSAA Blue Maps to show for it. Both championship wins ended with a walk-off hit.
How have the Makos done it?
“When you’ve got a group like that, it’s not hard, I’ll be honest with you,” Alexander said. “I tell them all the time – I drive the bus, drop them off and say, ‘Good luck, girls.’ They’re a lot of self-motivated girls, (and) they’re a joy to coach.”
Orange Beach took a 1-0 lead in the first inning when pinch runner Ella Ward scored thanks to a walk and Mars Hill throwing error. The Panthers (39-11-1), coached by Mollie Lowry, tied it in the fifth on Dylan McDaniel’s RBI bunt single.
Beebe drew a walk to open the seventh inning. Georgia McDonald then laid down a perfect sacrifice bunt, and Beebe raced to third on the play. She slid head-first into third to slip under Mars Hill third baseman Grace Stanfield’s tag. She then scored on Wilson’s game-winning hit.
Beebe had already walked and reached on a fielder’s choice when she stood on first base and noticed the third base bag was without a defender when McDonald rolled her sacrifice bunt towards the pitching mound.
“I took a peek to make sure nobody was at third,” Beebe said. “I told myself I needed an extra base for my team so they could score me in. I knew we would make it happen.”
“She made the right read, and we just took a chance,” Alexander said. “Sometimes you’ve got to do that. The first through sixth innings weren’t working, so we had to figure something out. It paid off.”
Facing a 1-1 count, Wilson stepped back into the box and belted a single into shallow left field to bring home Beebe and a second straight state championship to Orange Beach.
“I had confidence in my teammates, knowing that whether it hit or not that my runner would find a way to score and win this game,” Wilson said. “That’s what our coaches teach us. Be aggressive and trust your instincts.”
Top-ranked Orange Beach worked its way into the championship round on Friday with three wins, beating Luverne 3-1, third-ranked Hatton 10-1 and No. 4 Mars Hill Bible 2-1 in the winners bracket final.
Orange Beach’s KG Favors earned the win, allowing three hits and three walks in seven innings. She struck out eight and was named tourney MVP following the title game. Kaitlynn Robertson and Madison Cogswell both crunched doubles for the winners. Favors was joined on the all-tourney team by teammates Robertson and Wilson.
“Gritty, I mean it’s too gritty to even describe,” Alexander said. “That pitcher for theirs (Riley Vaughn), she’s a warrior. Our culture – part of the thing we preach all the time – is being gritty and that’s a gritty group. We didn’t hit it well at times, but when we needed it, they came through just like they did last year.”
Mars Hill (39-11-1) got a runner on base with one out in the sixth, but followed with a strikeout and foul out to end the inning.
The Panthers were sat down in order in the seventh on consecutive groundouts and a final strikeout from Favors, a freshman who went 4-0 through the state tournament. She earned the complete-game win in the final, allowing 1 run on 3 hits with 3 walks and 8 strikeouts.
“Our team really focused on trust and that’s what I had behind me. I knew if I put the ball where I’m supposed to, they would have my back at all times. I have so much trust in my catcher, Ava Hodo, and I was here half the year and it’s amazing how we have our bond already,” Favors said.
The Makos have gone 66-18 playing teams from all classifications while winning back-to-back state titles in its only two years of varsity softball at the school.
“We got all the community support in the world and it’s a dream job. Wh