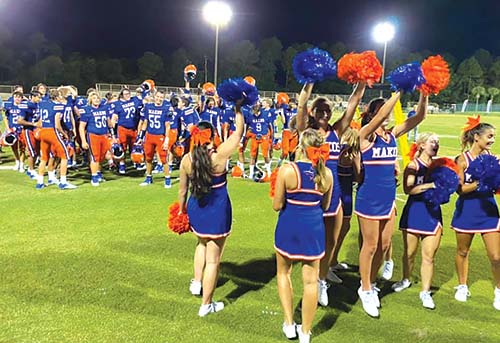 The Orange Beach High School football team’s debut was a victorious one as the Makos defeated JF Shields 35-20 under the lights at the Orange Beach Sportsplex on Aug. 21. The Orange Beach middle and high schools opened in a brand new building adjacent to the Sportsplex earlier this month. Before Gulf Shores formed its own school system in 2017, middle and high school students from Orange Beach attendd school in Gulf Shores. The Makos are also at home on Aug. 28 against Fruitdale. Game time is 7:30 p.m., and tickets must be purchased online before hand. The team is coached by Chase Smith, who is also the school’s athletic director. From 2012 to 2018, Coach Smith served as an assistant coach at the University of South Alabama, helping develop 11 All-Sunbelt Conference players. Prior to coming to Orange Beach, Coach Smith served as Athletic Director and Head Football Coach at Robertsdale High School for one year. He and his wife Vanessa have one daughter, Monroe.