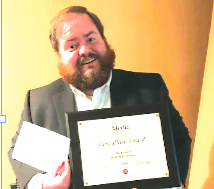 By John Mullen
Cliff McCollum (pictured) may have left the newspaper business for a job with the Baldwin County Legislative Delegation but he walked away with another pile of awards from the Alabama Press Association. The current Baldwin County Legislative Delegation Constituent Services Director and former journalist swept the Best Public Service award category at this year’s Alabama Press Association Media Awards on June 29 at the Perdido Beach Resort.
McCollum, a Fairhope resident, won first and second in the category, and the judges chose to award no third place in that category.
McCollum won second place Best Public Service for his coverage of a memo from Fairhope Mayor Karin Wilson to her city’s employees in which Wilson told city employees they were not allowed to be directed by Fairhope city council members and that contact with a council member should be reported to a departmental head.
McCollum won first place in Best Public Service for his stories involving usage of City of Fairhope city property in the form of barricades in support of a Roy Moore election rally on private property and whether use of that city property for the event was a violation of state law.
McCollum said he was humbled for the wins in the category, one of the “Big 10” prestigious awards given out by the Alabama Press Association.
“I’m pleased with the awards, though the greatest satisfaction with stories like those in making sure that truth and information got out to the public,” McCollum said. “Awards are certainly nice, but helping to create an informed public is the highest goal for a journalist.”
McCollum won four other awards this year that had been previously announced, including:
• A First-Place award in Best In-Depth News Coverage for “Baldwin Behind Bars,” an inside look at the Baldwin County jail facility.
• First and Second Place awards in the Best Humorous Column category.
• A Second-Place award for Best News Feature Story for his piece “A look inside the Baldwin County Animal Shelter”
McCollum won the awards while working at a community newspaper group within Baldwin County.