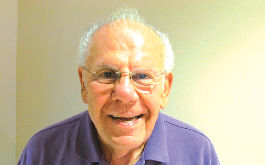 There will be a service honoring the life of Don Meghreblian on Saturday, December 14 at 11 a.m. at St. Andrew by the Sea, located at 17263 Fort Morgan Rd. in Gulf Shores. A reception for family and friends, hosted by the church, will follow. An online guestbook is available at AustinFuneralService.com.
Don (pictured) passed away on October 28 at the age of 85. He was preceded in death by his loving wife, Carol, son Michael, and sisters Isabelle Melkesian and Annabelle Hintlian. He is survived by his son, Mark (Shari) Meghreblian of Franklin, TN and four grandchildren.
Don and Carol retired to Gulf Shores in the mid-1990s, where they opened and ran Jubilee Gifts, an apparel and gift store. Don remained very active in the community of Gulf Shores after the death of his wife in 1994 and supported many local charities and volunteered his time with numerous organizations.
Don will be remembered as a gregarious and larger than life personality, who was very passionate about the causes he supported, including St. Andrew by the Sea. He was always looking for ways to honor Carol’s memory – whether by providing altar flowers, helping to establish the memorial garden, helping to install a pipe organ, or taking part in the recent building project. It is for this reason that the family asks that, in lieu of flowers, memorials be sent in Don’s honor to: St. Andrew by the Sea; P.O. Box 2385, Gulf Shores, Alabama 36547.