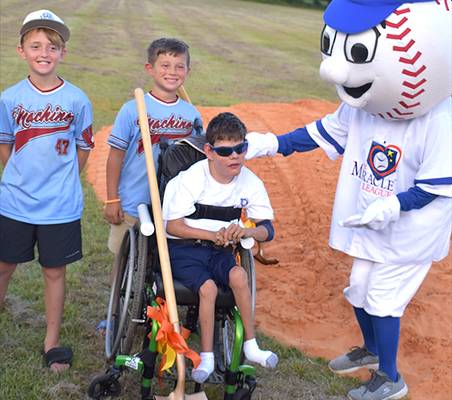 By Fran Thompson
The Pleasure Island based founders of Miracle League of Coastal Alabama (MLCA) did not have to go far from the island where the non-profit was hatched to find a home.
A joint legacy project of the Gulf Shores and Orange Beach Lions Clubs under the direction of chairman Bruce White, MLCA recently broke ground on a beautiful 10 acre slate of land just 20 miles north of the Gulf of Mexico near downtown Summerdale.
Summerdale Mayor David Wilson said he and his town council had attempted to bring a Miracle League field to their town even before he was approached by MLCA.
“The Mayor and Town Council have responded quickly to our every need,’’ White said. “They have been 100 percent behind the project from the start.”
The Miracle League Field is a facility that is tailored specifically for special needs children. The park accommodates wheelchairs, walkers, and other assistive devices while helping to prevent injuries.
First hatched in 2004, the MLCA gained momentum when Pleasure Island’s two Lions Clubs became involved.
“Because our annual duck race was so successful, we were able to donate $1,030 to the Miracle League,’’ said Orange Beach Lions Club President Margaret Long. “We hope to give more next year.’’
Maybe not so coincidentally, Long’s son Wesley, through his business at Alligator Alley, is also a major fundraiser for MLCA through the Alligators & Ales fundraiser.
Gulf Shores Lions Pat and Madeline Avinger are the parents of a special needs daughter, Celie, who was a huge inspiration for White to take the lead on the legacy project.
“It started with The Gulf Shores and Orange Beach Lions Clubs,’’ White said. “It was their commitment to the project that allowed us to move forward in the first place.’’
Work has already started on the MLCA infrastructure. Next will be the completion of an all-inclusive playground and finally the Miracle League baseball field. The project buildout is estimated to be 18 months.
The amount of money needed to build the park envisioned by the two Lions Club is tremendous – more than $2.5 million, including in-kind services.
“I know it’s a lot of money. We just take it day by day and step by step,’’ White said. “We are still in the process of conquering the $2.5 million price tag.’’
As of August 1, the MLCA had collected $618,000 in monetary donations and an additional $500,000 in service commitments.
“We still need to raise a lot of money,’’ White said at the groundbreaking, “close to $1.5 million to complete the project.”
The MLCA development team includes seven committees and hundreds of volunteers. White said their dedication to the project has been unwavering.
“None of these volunteers are retired, and this is an extremely time-consuming project,’’ White said. “It cuts into their work and family time. As tough as it is, all of them are relentlessly working to get this park built.’’
Larry Thompson, President of the Miracle League of Pensacola, was also at the groundbreaking and has provided direction, guidance and advice to the MLCA team from its inception.
White added that Ken Gates of Ken Gates Construction coming onboard was key to getting project construction started.
“We had beautiful set of construction drawings, but the one thing we lacked was the ability to read and understand them.’’ White said. “Ken joined our development team as the general contractor and from that point forward, things have moved quickly and smoothly.’’
In addition to Pleasure Island state representative Steve McMillan, dignitaries at the groundbreaking included Baldwin County Commissioners, and reps from all five Baldwin County Chambers.
The Lower Alabama Young Professionals not only showed up, they brought a $1,200 donation check with them.
“Most importantly, in attendance are several of our special needs residents and their families,’’ White said. “We are all excited you are here. It’s amazing how few of Baldwin County’s special needs families are even aware of this project. We’re hoping exposure from today’s groundbreaking will remedy that situation.’’
MLCA includes a committee that will coordinate with special needs teachers throughout Baldwin County to bring awareness to the project and recruit special needs families to work with MLCA.
“If anyone would like to join our team, I promise you, we can use all the help we can get,’’ White said. “We’ve been working hard and we will continue to work just as hard as we move closer to making “Dreams Come True” for our special needs residents and their families.’’
More info: miracleleaguecoastalalabama.com.

Pictured: Architectural rendering of the Miracle League Park in Summerdale.

There are obviously a litany of contributors to thank when the end goal is raising $2.5 million. Listed below are just a few of the many who, like Pleasure Island’s Lions Clubs, believe in the project.
• The Snook Foundation Complex drawings were purchased with a $100,000 grant from the first major donor, .
• Lucido Engineering did the survey as an in-kind service.
• General Contractor Ken Gates is donating services and many of his sub-contractors will do the same.
• Lions Club International awarded MLCA a $100,000 grant.
• IMPACT 100 awarded MCLA a $91,000 grant.
• Erie Meyer Foundation awarded MCLA $52,000.
• Gulf Shores Lions Club has donated over $36,000.
• Central Baldwin Sunset Rotary Club donated $35,000.
• Foley Womens Club donated over $10,000.
Gulf Shores United Methodist Church donated $10,000
• Foley High School has donated over $8,700.

There are as many levels of MLCA sponsorships available as their are creative fundraising ideas, including permanent sponsorship opportunities such as playgrou
.• Donations of $200 will recognized on a permanent plaque within the park.
• Donations of $500 to $9,999 qualify for anything from a honor wall brick to park benches, picnic tables and outfield signs.
• Donations of $10,000 or more will have signage on the center plaza Walk of Fame.
• There are many other permanent sponsorship opportunities such as playground equipment, on deck circles, marquees and naming rights.
• The Town of Summerdale will give naming rights to the entire sports complex for any donation of $500,000.

The family of Ed Rodriguez (pictured) was a very active member of the MLCA development committee when he worked as president of the Alabama Gulf Coast Chamber of Commerce. On January 7, 2018 Ed passed away unexpectedly and his family requested donations be made to the MLCA in lieu of flowers. People donated over $19,000 in Ed’s memory. “There will be a monument honoring Ed in the park,’’ MLCA Chairman Bruce White said. 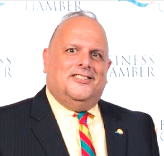