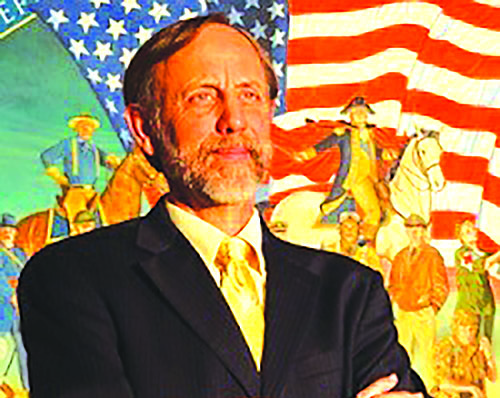 Fairhope based artist Dean Mosher (pictured) will talk about his craft, including a mural of Wilbur Wright flying around the Statue of liberty, when he addresses the May 4 gathering of the Ancient Aviators social group at American Legion Post 44 in Gulf Shores at 8:30 a.m. The group, formed in 2002, gives aviators and others a chance to “tell their story.” A full breakfast is available for $6, and visitors are always welcome. The group meets the first Tuesday of each month Info: bensman84@aol.com or 251-990-8258.
Mosher has served on numerous organization boards, including five years as Historian General of the Naval Order of the United States. He has been honored with many awards, including the Commander General’s medal for saving the archives of the NOUS. He is often sought out for lectures and presentations around the country and was the first Naval Heritage Lecture presenter for the Surface Navy Association at its Annual National Symposium at the Crystal City Hyatt in Alexandria, Virginia, in 2004.
His work has also appeared in many books, including The U.S. Air Force: A Complete History, published by the Air Force Historical Foundation and the National Air & Space Museum; Thomas Macdonough: Master of Command in the Early U.S. Navy (Naval Historical Press); Oliver Hazard Perry: Honor, Courage, and Patriotism in the Early U.S. Navy (Naval Historical Press); The Sixty Years’ War for the Great Lakes, 1754–1814 (Michigan State Historical Press); West Wind, Flood Tide: The Battle of Mobile Bay (Naval Historical Press)and Glorious Companions Vol. 1&2. Other publications that have used Mosher’s work include Naval History, Golf Digest, and Shipmate. His artwork has also been seen in documentaries produced for the National Park Service and public television.