Mullet Toss is also a profitable weekend for local charities 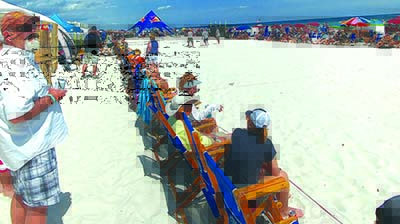 Mullet Toss is also a profitable weekend for local charities

It’s fitting that Flora-Bama’s Annual Mullet Toss weekend – officially The Interstate Mullet Toss & Gulf Coast’s Greatest Beach Party – starts with a golf tourney benefiting Multiple Sclerosis Society. The event, in addition to being a three day frenzy of food, fun and frivolity for thousands of tourists, also allows local civic and youth sports groups a chance to raise money for their respective charities by selling food, parking cars and hawking goods on site. It’s true that the Toss contributes over $10 million to the local economy. But it also raises over $25,000 for local schools, sports associations and charities every year. “We had a fantastic year and raised lots of money for Secret Santa,’’ said Cinnamon Swift of the Pirates of Lost Treasure Mardi Gras krewe. “We don’t have all the numbers yet,