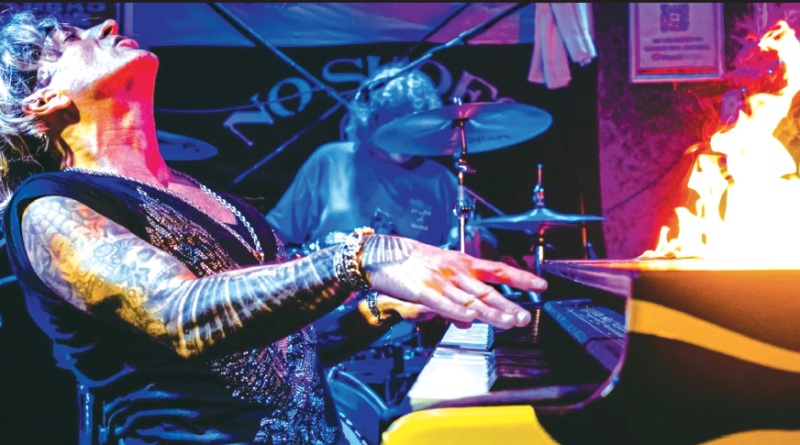 Brandon Giles (above) will bring the high-octane pyrotechnic boogie-woogie – as well as lighter fluid and matches – with him when he headlines the 5th Annual Gulf Coast Medical Fund fundraiser at The Point at 14340 Innerarity Point Rd. in Pensacola on Saturday, Oct. 22 from noon until 10 p.m. Tickets are $10 and available at the gate or at gcmmf. org. Giles and his band will play from 8-9 p.m., with a musicians’ jam with Webb Dalton to follow.
Other scheduled acts include the buzz worthy Christina Christian, Nick Biebricher, Josh Newcom, Rick Whaley, Scott Koehn, Johnny Barbato, Platinum Premier, J Hawkins, Jason Justice, Chris Moreau, Stephen Lee Veal, Tommy Mazzullo, Mac Walter, Kelly Presley, Brennan Crim, Jesse Bumann, Harold Boothe and Stephanie Leigh. The acts will play simultaniosly either inside the restaurant or in the courtyard.
The GCMMF was formed as a non-profit by Dalton to provide medical cost assistance for musicians and songwriters in Alabama, Florida, Mississippi and Louisiana. That fund provides help with initial office visits, initial prescriptions, and education on treatment and diagnosis through counseling. Its goal is to offset the cost of minor health issues that if left untreated, could unnecessarily develop into major health issues.
Giles wastes no time engaging the audience with his “Hell Come to Town” style. Take an obvious influence, Jerry Lee Lewis, and add Elvis, the Rolling Stones, The Doors and Hank Jr., and you get Giles’ unique hard rocking, high energy gumbo.
“If I had to describe my music, it’s kind of like Little Richard meets AC/DC,” said Giles.
In addition to original music, he infuses his shows with honky-tonk classics, blues and boogie-woogie standards.
Born in Magnolia, Ark., Giles lived on a farm for his first 18 years. Working in the fields of his uncle’s watermelon and pea patches, he quickly realized that his real life ambition was elsewhere.
He enrolled at Arkansas State University while also playing clubs and honky-tonks in nearby Memphis, including frequent appearances at the historic Earnestine & Hazel’s dive bar.
“I would play and sing in the saloons and the audiences would tip me,” he said. “It took about three seconds after that first dollar hit my pocket to realize that my pea-picking and watermelon vine turning days were over.”
Upon graduating from ASU, Giles made a leap of faith and moved to Music City. He quickly earned a regular gig at Nashville’s premiere outlaw honky-tonk club, Layla’s Bluegrass Inn on Lower Broadway.
“It was what I like to call a crash course of honky tonk chicken wire, brick wall, shotgun nightclub entertaining,” he said. “Forget New York City, if you can make it down there, you can make it anywhere!”
He has played with Les Paul in Times Square, appeared on Monday Night Football, and even performed with the late Mickey Gilley at Mickey’s theater in Branson. Giles remembers Gilley as both a mentor and a friend.
“He was a kindhearted man who really helped younger artists coming up,” he said. “That generation, there wasn’t the pitch correction and dance lessons. You sank or swam on your own. The old school entertainers and musicians are dying out and it’s heartbreaking to see. A lot of good new ones are coming up, but it’s sad to see legends go.”
Another highlight of his career was an opportunity to talk music with Ray Charles.
With the exception of getting sober, Giles said moving to Orange Beach was the best decision he has ever made.
“I went through a very dark time, and had I not found recovery, I don’t know that I would be here,” he said. “Once you begin to work through your trauma and really find out who you are, without the lights, without the instruments, without all the bells and whistles, and without alcohol, you begin to connect with your work on a deeper level. I’m not just putting out entertainment, I’m putting myself out to the fans and truly connecting with them.”
His next project is a full length live album.
“I want it to be like a front porch party, which is common where I’m from,” he said. “Some friends getting together without all of the production. Just a clean Memphis, New Orleans, Gulf Coast influenced sound. Like you’re visiting with friends who invited you to a jam session. I want the listener to feel like they’re sitting around people who love them, because we do, tremendously. My fans are the reason I get up every day.”