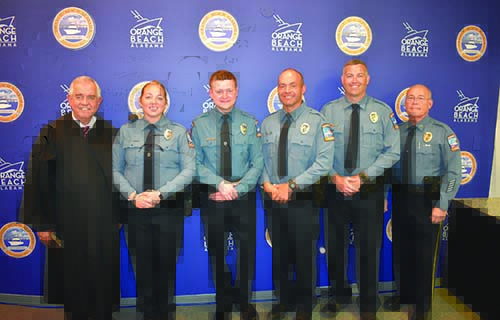 New Orange Beach Police Officers
Four new Orange Beach police officers were sworn in by Municipal Judge Julian B. “Buddy” Brackin during the City Council meeting on Sept. 21. The new officers (pictured) were introduced by Police Chief Steve Brown. He said he found that in Officer Kimberley Neuner, Officer David Zotz, Officer Christopher “Luke” Franklin and Officer Louis Edward Williams, Jr. “It’s my honor and privilege to lead this department and in saying that it’s very important that we bring on board those who are going to replace me and folks on the command staff,” Chief Brown said.
With the mindset of “Protecting Paradise” in Orange Beach while looking for new officers, Chief Brown said, “We want the right fit. we want the right mindset and we want the right heart.”
“This is Orange Beach, Alabama and we have a lot of officers who want to move to the beach but very few make the cut,” Mayor Tony Kennon said. “So when you see these guys standing there having made the cut, they are very high performance and we appreciate them very much. We will never let y’all down, I promise you.”