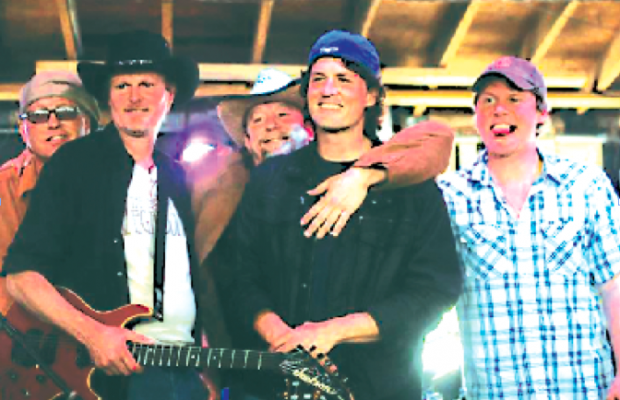 By Fran Thompson
The Newbury Syndicate, a popular Perdido Key based band formed in 2011 and led by namesake Chris Newbury, will play a reunion concert on Sunday, June 9 at 6 p.m. at The Point Restaurant on Innerarity Point.
The band, which also includes Preston Stanfill, Mike Locklin, Buzz Kiefer, Jonathon Newton and Mel Knapp, released a self titled album in 2014 and held down a multi-year residency at the Flora-Bama. This will be the first time in two plus years that the original band will play together.
“That’s the last time we played together with Buzz anyway, and it’s not the same without him,’’ Newbury said. “But it’s kind of cool that we don’t play together that often because it makes it more special when we do.’’
The Newbury Syndicate built a huge local following mostly because they are great musicians and Newbury is an amazing vocalist. But their appeal was also due to their eclectic set list, which included country standards, lots of originals, Van Halen rockers, Temptations’ Motown tunes and the best of Muscle Shoals R&B.
“I think we put on a good show,’’ Newbury said. “Our goal was always to play songs that the blue hairs and snowbirds would enjoy while also appealing to the 21 year olds. I think we did that.
“We were not going to get up there and just do a bread and butter ‘Sweet Home Alabama’’ set,’’ Newbury added. “We picked songs that were hard to play, songs that we had to rehearse. And that’s the reason we picked them – because they were hard to play. We did not get up there all willy-nilly. We wanted our sets to be unique, and we looked for that in our songs.’’
Presented by the Frank Brown Songwriters Festival and coordinated by Cynthia Adams, the reunion show will be staged on the east end of the Point Courtyard to allow for more capacity and more dancing space, according to Adams.
“Trying to get everybody’s schedule to coordinate so we could do this was a bit like herding cats, but this is a band that people always ask about,’’ Adams said.
“I always say there are three kinds of music: good music, bad music and music that makes girls dance,’’ Newbury said. “Our crowd is a little older. So I don’t know how much dancing there will be.’’
Tickets to the reunion show are $15 per person and available at eventbrite.com or at the gate. There will be art vendors in the courtyard and food available during the concert. Patrons are encouraged to bring beach chairs.
Dennis Boyce, Jackie Bennett & James Daniel have all donated paintings for a raffle that will benefit Gulf Coast Musician’s Medical Fund (Gcmmf.org).
The Newbury Syndicate released a self titled album in 2014 that was funded by $10K in donations from fans, a fact that both humbles and amazes Newbury.
“This is a community that supports original music, and (Frank Brown Songwriters Fest founder Joe Gilchrist) Joe deserves a lot of credit for that,’’ Newbury said. “Joe trained the whole community to appreciate original music. It’s always the locals at our shows who tell people to shut up and listen when out of town people are getting loud.”
Newbury said it was that appreciation for original music that attracted his father, legendary songwriter Mickey Newbury to our white sands. It is also why he came to visit and stayed.
“I am always aware that (fans of my dad) are there when we play. Of course, my dad has something to do with it, and that is a good thing. But it’s not like I was able to look at it as a meal ticket. He liked playing here because of the local support for original music. That was why this area meant so much to him, and it all comes back to Joe. This is not something that happens organically. It has to be cultured.’’
The late Mickey Newbury was inducted into the Nashville Songwriters’ Hall of Fame in 1980. His songs were covered by hundreds of artists, including Tom Jones, Elvis Presley, Kenny Rogers, Andy Williams and Eddy Arnold.
The Point is located at 14340 Innerarity Point Rd. For more info, call 850-492-3577