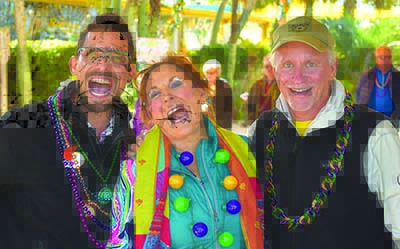 New Orleans Mayor Latoya Cantrell issued an edict shutting down bars from the Friday before Mardi Gras until Ash Wednesday and closed popular gathering areas such as Bourbon, Decatur, and Frenchman streets to pedestrians and vehicles.
Mobile is closing downtown streets to vehicular traffic on Fat Tuesday in hopes it will keep people outside and provide a safer option than gathering in the usually packed downtown bars and restaurants.
Both cities have cancelled all parades.
Meanwhile, South Baldwin County businesses plan to Laissez Le Bon Ton Roulet on Mardi Gras weekend, and one municipality, Elberta, will host a parade on Saturday, Feb. 13.
The Elberta parade is expected to attract mardi gras krewes from Orange Beach, Gulf Shores, Pensacola and Mobile. It will roll on a two mile route through town beginning at 2 p.m.
Parade founder Vicky Norris, who is also on the town’s council, urged all attendees to mask up and follow other Covid-19 related protocols.
“Similar to our July 4th and Christmas festivities and the unknown circumstances of the Covid19 situation, we ask that you consider wearing your masks for the comfort of others and practice your social distancing measures by tailgating and setting up your parties at least six feet apart,’’ Norris said. “Let’s all do our part and continue to enjoy the outdoor activities, as we try to safely bring them to you.’’
Norris added that any civic groups, krewes, businesses or individuals interested in participating in the parade can contact her at 251-232-5393.
The parade will start on Illinois Street, continue east onto Highway 98, and north onto County Road 83, ending at Kichler Circle.
The Flora-Bama, located on the Gulf of Mexico at the Alabama-Florida state line, will offer a free drink to the first 100 people through the doors beginning at noon on Fat Tuesday, with festivities scheduled to continue all day long at the world’s greatest honky-tonk.
Patrons are encouraged “to dress up, come dance to a fantastic music lineup, eat some king cake, get some beads, and have some bushwhackers.’’
Musicians scheduled to play on Fat Tuesday include T-Bone Montgomery, Johnny Barbato, Al & Cathy, Ricky Young, the Perdido Brothers, Johnny Hayes and The Ole River Junkies.
The Bon Secour River Mardi Gras Parade is scheduled on Sunday, Feb. 14 at 2 p.m. The parade will start at The Galley on County Rd. 10, and the restaurant will be a well prepared host at the prime viewing spot.
The City of Orange Beach and The Wharf have teamed up to celebrate Mardi Gras on Saturday, February 13 during the Boom Boom Mardi Gras Fireworks event beginning at 5 p.m.
While Wharf parades have been canceled, this socially distant event will still allow some good times to roll in a safe manner. Guests can watch the fireworks display from a variety of locations.
DJ Silky will fun music under the palms. The SPECTRA Laser Light Experience shows will play at 6 p.m. and fireworks will fill the sky at 7 p.m.
Stick around and get your boogie on at The Sandshaker at The Wharf, which will host its All Krewe Mardi Gras Party beginning at 9 p.m. featuring music from Mid-Life Crisis.
The City of Gulf Shores and Lucy Buffett’s LuLu’s canceled plans for their respective Mardi Gras and boat flotilla parades, but LuLu’s will still move forward with its annual Fat Tuesday birthday party, offering free birthday cake all day and live music beginning at 11 a.m.
Papa Rocco’s in Gulf Shores will open, as usual, at 9 a.m. on Fat Tuesday. And since there will be no parade rolling down Hwy. 59 in front of the popular restaurant, owner Bill McGinnes is hosting a “Yardi Gras” party. Festivities include drink specials, beads, moonpies, and throws.
Big Beach Brewery in Gulf Shores will kick off its always spectacular Fat Tuesday party with the Steve & Joe Dueling Piano Show at 11 a.m. The excellent Grateful Dead tribute band, East L.A. Fadeaway, plays at 2 p.m., and a contest to determine the best decorated bicycle starts at 3 p.m.
As part of the 2021 Winter Lecture Series presented by Gulf Shores & Orange Beach Tourism, Craig Roberts will talk about the true history of the western hemisphere’s oldest Mardi Gras on Friday, Feb. 12 at 10:30 a.m. at The Port at the Wharf. Mobile’s Carnival season culminating with Mardi Gras day is the nation’s 2nd largest community festival and the first Mardi Gras in America (Take that New Orleans!). Visit gulfshores.com or call 251-968-7511 for registration info. Masks are required.