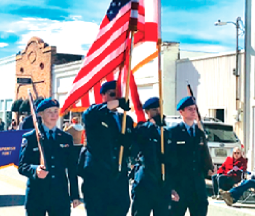 The Annual American Legion Post 99 Veteran’s Day Parade and Wreath Laying Ceremony which will be held on Monday, November 11 at Max Griffin Park in Foley. Parade units will begin lining up at 9 a.m. Parade will begin at 10 a.m. and follow normal parade route.
Lead units will start at the corner of Verbena and South Alston, lining up around Max Griffin Park on Verbena, South Pine and West Roosevelt St.
For more info or to participate in the parade, call Jay Ryan at 251-228-1206. This event is in honor of all veterans and first responders. Following the parade, which will end back at Max Griffin Park, the Foley Veteran’s Day Wreath Ceremony will begin at 11 a.m. At the conclusion, attendees are invited to join American Legion members for a free lunch at Post 99 at 2101 South McKenzie Street (Hwy. 59).