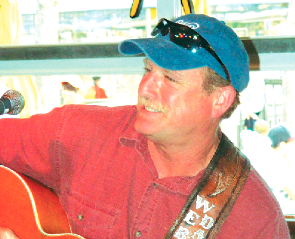 The 2nd Annual Gulf Coast Medical Musicians Fund will be held Nov. 2-3 at The Point Restaurant (14340 Innerarity Point Rd.) in Pensacola beginning at noon each day. Cover charge is $10 at the door and the event will feature musicians from Florida to Louisiana donating their time and talent on stages inside the restaurant and in the courtyard. Tickets are info are also available at gcmmf.org. And the day’s festivities include a silent auction.
The GCMMF is the brainchild of songwriter/entertainer (pictured) Webb Dalton, and it is now up and running with donations received from local music lovers. Dalton recorded a full gospel album with all CD proceeds going to the fund.
“We all know that musicians normally don’t receive health care so to help with that,’’ Dalton said. “All proceeds pay for doctor visits and high dollar prescriptions. Find out more at the fundraiser.’’
Dalton, of course, along with musical mainstays such as John Joiner, Rhonda Hart, Bubba & Them, Lea Anne Creswell, T-Bone Montgomery, Rick Whaley, Jason Justice and Chris Newbury are expected to perform.
Dalton saw the need for a medical fund after losing three musician friends. he knew that with the help of the community, this was a problem that could be overcome.
Webb spent over 10 years on the road opening for Garth Brooks, George Strait, Randy Travis, George Jones and others.
However, for the past 30 years, he has spent as a public servant in law enforcement, currently a Senior Agent for the State of Alabama.
‘’I’ve seen both sides of not having insurance while on the road playing music full time, and the past 30 years of playing music while having insurance. Most musicians will play a gig with whatever illness they have and the crowd doesn’t even know about it. The show must go on. The rent, food, the electric bill, gas to and from a gig has to be paid.”
Grammy/Dove award winning artist/songwriter, Bruce Carroll co-produced Dalton’s fundraising gospel CD for the GCMMFund. The album, “Things Left Undone,” was released at the inaugural fundraiser.
“The love shown at the first fundraiser was overwhelming. The Gulf Coast music community is such a close-knit family between the locals, tourists, restaurant/business owners, and musicians,’’ Dalton said. “The musicians, artists and songwriters that have been helped during this short time, proves there was a need. Because of th