O.B. Billfish Classic weigh-ins May 17-18 at The Wharf 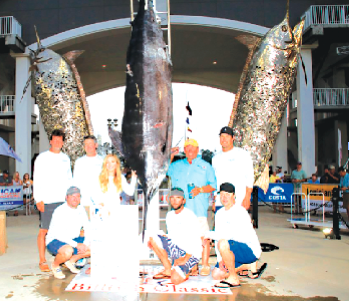 O.B. Billfish Classic weigh-ins May 17-18 at The Wharf

The 2019 Orange Beach Billfish Classic, the kick-off to the big game fishing tournament season along the Gulf Coast, will be held May 16-18 at The Wharf Marina in Orange Beach. The 23rd annual event is also the first leg of the Gulf Coast Triple Crown Championship. At stake for the top team in the Triple Crown is not only a custom six-foot marlin trophy but also the honor of being named the best billfishing team in the Gulf of Mexico for the year.
Fishing commences at noon on May 16. Weigh-ins under the billfish at Marlin Circle will be held from 7-8 a.m. and 7-10 p.m. on Friday, May 17 and 6-10 p.m. on Saturday, May 18. The tourney’s awards breakfast will be held on Sunday. The Orange Beach Billfish Classic is the single largest tournament donor annually to The Billfish Foundation. For tournament information and updates visit orangebeachbillfishclassic.com, call (251) 402-8190 or email info@orangebeachbillfishclassic.com.
Pictured: The 2018 OBBC saw record participation and prize money, as 53 boats released 25 Blue Marlin, six White Marlin and one Sailfish while weighing five Blue Marlin. The team from Done Deal, a 70′ Viking from Houma, was the only boat to weigh a Blue Marlin on Friday night to claim an early tournament lead that would not be bested. Angler Katie Gonsoulin’s 118.5 inch Blue Marlin topped the scales at a shockingly big 740.6 pounds. “I was hoping that fish would maybe hit 700 pounds,” said Done Deal Captain Jason Buck. “We knew it was a fat fish, but we are all happily surprised when the number posted.”